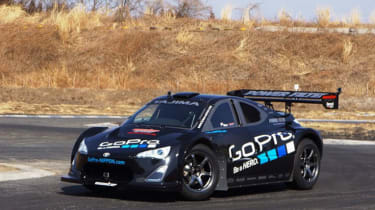 The Toyota GT86 has been transformed into a Pikes Peak challenger. The Toyota Super 86 will compete in the Unlimited class of the legendary hill climb event, taking on the Peugeot 208 T16 and fighting for overall honours.

Like the 208, its resemblance to its road car relative doesn’t extend far beyond pasting some carryover headlights onto an uber-powerful race car. Gone is a front-mounted 2–litre boxer four engine with 197bhp, in its place an amidships 3-litre twin-turbocharged V6 engine producing 670bhp and 597lb ft connected to a six-speed sequential gearbox.

That’s someway short of the Peugeot’s 875bhp, and with a stockier 1080kg to shift, the Toyota’s 630bhp/ton power-to-weight ratio is quite short of its French rival’s 1016bhp/ton.

Though while the Peugeot is being piloted by rally legend Sebastien Loeb, at the Toyota’s helm will be Nobuhiro Tajima (more commonly known as Monster Tajima), a man with over 20 years of Pikes Peak experience. That includes breaking the hill climb record twice over, most recently in 2011 when he blasted through the ten-minute barrier in a Monster Sport Suzuki SX4. That’s a car this Super 86 bears a fairly heavy resemblance too.

Power or experience, Peugeot or Toyota, Loeb or Tajima; where will your money lie come June 30 and the 2013 Pikes Peak?

Video of Monster Tajima’s Toyota Super 86 in action below…