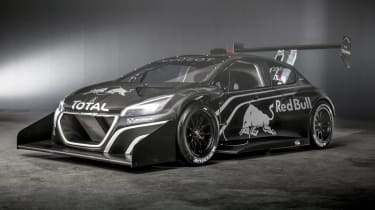 10
Peugeot has announced its return to one of the most prestigious motorsport events on the planet, the Pikes Peak Hill Climb. The French company has released the first teaser images of its specially prepped race car, the 208 T16 Pikes Peak, which will be driven by nine-times world rally champion, Sebastien Loeb. Peugeot looks determined to mark its return in 2013's event by winning it.

These first official images show that the familiar shape of the 208 has been altered significantly, with a wide carbonfibre body kit accompanied by the enormous aerodynamic kit normally seen in the Unlimited Class of the American event. The rear wing comes from the Le Mans-winning Peugeot 908 HDI FAP but no details have been shared yet about the 208 T16's powertrain.

The Pikes Peak Hill Climb has become a tarmac-only event since 2011 and during its 12.4 mile-long course, the drivers must tackle 156 corners, taking them from an altitude of 2865 metres up to 4301m. Peugeot wants to revive its glory days, much like Ari Vatanen’s record breaking run in a Peugeot 405 T16 that gave us one of the most iconic videos in rallying history, named the ‘Climb Dance’. Links to that car are strong - Peugeot previewing the new 208 T16 alongside its ancestor in the video below.