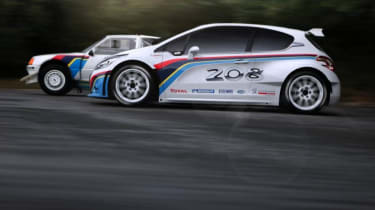 The Peugeot T16 is making a comeback. Nearly 30 years after the legendary mid-engined, all-wheel-drive 205 T16 debuted as a Group B rally car, the 208 Type R5 has been rebranded with the iconic nametag.  It will fight its battles in the 2013 FIA European Rally Championship, with Peugeot factory driver Craig Breen currently conducting the bulk of 208 T16 testing. And while the 205 T16 extracted a mighty 450bhp from a 1.8-litre turbocharged four-cylinder engine, the 208 T16 powers all four wheels with a front-mounted 280bhp 1.6 turbo four. The motorsport 208 is yet to compete, making its competitive debut later in 2013. It will eventually replace the 207 Super 2000 as Peugeot’s halo rally car. While a road-going homologation special akin to the old T16 is unlikely, Peugeot has hinted a more potent 208 R may sit above the 197bhp 208 GTI. This year sees the 30th anniversary of the Peugeot 205’s launch. Thanks to its finely balanced chassis – and much-loved performance variants – it has been revered ever since.