Peugeot has set prices for its latest hot hatch at £18,895 - on sale later this year. 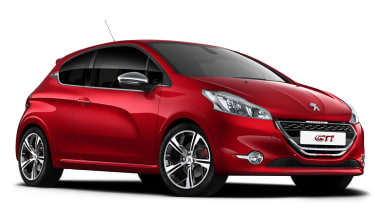 Peugeot has set UK prices of its 197bhp 208 GTI at £18,895, with order books opening in March. Production will begin in April, with the official launch taking place in May.

Powered by the same 1.6-litre turbocharged engine as the Peugeot RCZ, Mini Cooper S and Citroen DS3 Racing, it's tuned to the same 197bhp as the top RCZ model. Mated to a close-ratio six-speed manual gearbox, Peugeot's small hot hatch is capable of a claimed 0-62mph time of 6.8secs.

The firm pricing places the 208 GTI at the top end of its sector, costing almost £2000 more than the recently launched Fiesta ST, and perhaps more than the next generation Clio RS, which is expected to start from around £18k.

Towards the end of 2012, Peugeot released a limited edition model, which sold out almost immediately at £20,495. The LE model promised UK buyers to be among the first to take delivery of the GTI, when deliveries start in May.