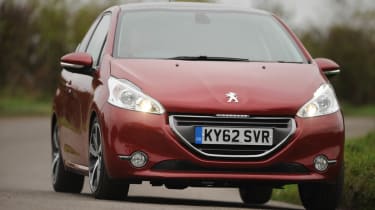 The Peugeot 208 Feline THP 156 was, in layman’s terms, the quickest, plushest 208 until the long-awaited GTI iteration arrived.

Peugeot is shouting loudest about the fact that the 208 is smaller and lighter than the 207 it replaces, yet is more spacious. There’s some new thinking inside, too: the steering wheel is nearly as small as a Caterham’s and is unusually placed, so you look at the dials over rather than through it. Standard on all but the lowliest 208s is a touchscreen multimedia system, which controls all radio, iPod and nav features. With this fitted, you don’t get a CD player, the 208’s one similarity with a McLaren MP4-12C. Otherwise, it’s a fairly conventional supermini, its front wheels driven by a 1.6-litre turbocharged petrol engine that’s shared in various states of tune with the Peugeot RCZ, Citroen DS3 and Mini Cooper S.

Sadly, this is where the 208 is least impressive. In order to properly see the dials you must place the steering wheel unnaturally low, and its diminutive size exaggerates its over-assisted, elastic-feeling reactions. The 208 turns in fairly keenly, but doesn’t communicate enough. Beyond that, it’s a competent enough car to drive, but it sorely lacks the sparkle small Peugeots used to be famous for, and which many thought the 208 would mark a return to. The ride feels reasonably well judged on smooth roads but proves crashy on rougher surfaces, which will curb your enthusiasm over Britain’s scarred but interesting B-road network. This 208’s strong point is its engine; the 1.6-litre THP unit is strong low down, but also very responsive to revs, and it heads north of 6000rpm as keenly and cleanly as in its other PSA and Mini applications. It’s a reasonably refined cruiser and comes with a claimed 48.7mpg, which is probably close to achievable if you’re taking it easy.

The Peugeot 208 is easily one of the best looking superminis on sale, which may be enough for many. A Ford Fiesta is better to drive, though, and a Volkswagen Polo duller but a more accomplished all-rounder.

Taken as this model alone, the near-£17k THP 156 seems pricey when a Renaultsport Clio 200 Cup or Skoda Fabia vRS can be bought for little more money. While quite different in their strengths and character, both are more powerful and notably more interesting than the 208 to drive.

If you’re fearing for the 208 GTI now, then don’t give up hope – Peugeot says that it has been working very hard on the chassis setup of the GTI, with its springs, dampers and anti-roll bars uprated, while the front subframe and rear crossmember have both been strengthened. Fingers crossed it’s dynamically superior to this warm hatch taster.