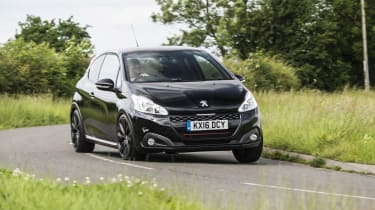 Naturally, it’s the car wearing official Peugeot Sport badging that’s the fastest of the GTis, but not by the margin you might expect thanks to the modest power difference between the two.

The manner in which each gets there differs little too, with both feeling very fast for their size (the Peugeot Sport is just a little more rampant as the boost builds) and slicing cleanly, if not with much tactility, through their six ratios.

Unfortunately, both also share the same flaw, albeit to a lesser degree in the Peugeot Sport – the 1.6-litre engine just doesn’t have enough aural appeal. We described the regular GTi as ‘muted and apologetic’ in evo 184 – an 'unenthusiastic drone’ would be another way of putting it – and while the Peugeot Sport has a slightly deeper exhaust note, there’s still little incentive to use that ample performance beyond the rate at which the scenery passes.