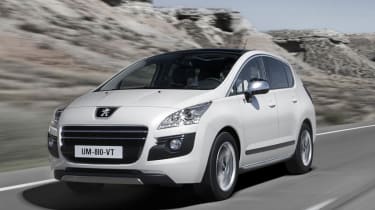 Peugeot's 3008 sits in a curious limbo, a car which seems to be a 4x4 but isn't. Instead it's a butch hatchback/estate designed to play to people's lifestyle fantasies. With this new ‘Hybrid 4’ version, however, it acquires an intriguing new USP. An electric motor between the rear wheels makes it not only a 4x4 when conditions dictate, but also a hybrid. It is the first diesel hybrid to reach production, the potential economy of the powertrain combination giving a tax-busting CO2 score of 99g/km. Not bad when there's a tidy combined total of 197bhp on tap. No other production car offers so much power for so little CO2 output.

That 197bhp comes from a 161bhp, 2.0-litre turbodiesel and a 36bhp electric motor. That's not much electric horsepower, but motors are all about torque and this one gives up to 148lb ft of it. Add to that the 221lb ft from the diesel engine and you have a potential 369lb ft. And yes, in this hybrid (unlike in, say, a petrol-fuelled Lexus RX 450h which also has electric power for its rear wheels) the point at which the two power units' torque curves cross is claimed to be at peak torque for both.

The electric motor can power the 3008 on its own at up to 31mph for around two miles provided there's enough battery charge. That's in ZEV mode; a central selector knob also triggers Sport mode, with faster gearchanges from the robotised manual gearbox at higher engine speeds, Auto mode in which you leave the systems to their own devices, and – here's where the driving differs from a Prius or an Insight – an extra mode labelled 4WD. In this mode, the electric motor is always ready whenever the rear wheels start to slither, making the Hybrid 4 into quite an effective soft-roader.

Other electric-motor cleverness includes helping the getaway by filling in for any turbo lag, smoothing the shifts of that paddle-shift/auto six-speeder with a ladling-in of torque when the diesel engine's drive is momentarily severed, and just adding oomph for keener acceleration. It also helps the stability system's efforts by applying torque to individual rear wheels to keep the 3008 on course.

It's hard to know exactly what to compare the Hybrid to. It's cheaper than a turbodiesel Range Rover Evoque but a lot less handsome. It's a cleverer piece of kit than a 4wd Qashqai, and more frugal than a Yeti 4x4. Its low tax liability trumps the lot.