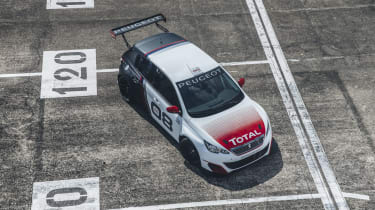 Peugeot Sport has revealed its new 308 Racing Cup ahead of its world debut at the Frankfurt motor show. Based on the 308 GTi, the stripped-out racer has received extensive chassis and engine modifications, and will succeed the RCZ Racing Cup in Peugeot’s single make racing championship.

Under the bonnet of Peugeot’s new racer is a 1.6-litre turbocharged four-cylinder engine, based on the unit found in the regular GTi. But Peugeot Sport has swapped the engine’s standard turbo for a more powerful one – borrowed from the 875bhp 208 T16 Pikes Peak car – to up peak output to 304bhp. 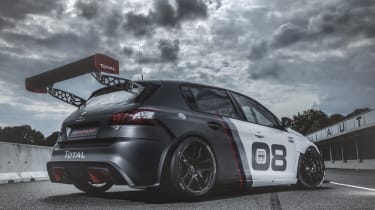 This represents a gain of 36bhp compared with the GTi, and combined with the racing car’s 1000kg kerb weight (63 per cent of that sits over the front), it ensures power-to-weight is rated at 309bhp/ton – comfortably beating the RCZ Racing Cup’s 245bhp/ton, and dwarfing the numbers attached to another popular single-make series racer, the 207bhp/ton Renaultsport Clio Cup.

During the 308’s race car transformation, the six-speed manual gearbox of the GTi has been ditched in favour of a six-speed sequential ‘box with steering wheel mounted paddles. Drive is still sent to the front, but it’s channelled through track-focused limited-slip differential, and the car’s 18-inch wheels are now wrapped in Michelin slick rubber (or wets when it’s raining). Stopping power is provided by six-piston calipers.

The Racing Cup is suspended on adjustable suspension front and rear, which enables damping rates, ride height, toe and camber to be adjusted to suit each circuit. The body shell has also been stiffened with an FIA-standard multi-point roll cage, and three pneumatic hoists have been integrated into the chassis for use in quick pit stops.

In order to keep weight down so it can compete in a variety of global championships (the 308 Racing Cup will also be eligible for competition in the Nürburgring VLN series, CER in Spain and CITE in Italy, to name a few) Peugeot has used polycarbonate to fill the rear and rear side windows, and the rear wing is designed to WTCC specifications.

The bodywork is also all custom for the 308 Racing Cup, with new aerodynamically optimised front and rear bumpers and wider front wings. The car’s footprint is now 106mm wider and 35mm longer (not including the wing) than the GTi, though its wheelbase remains unchanged at 2620mm. 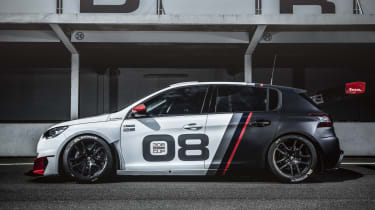 We only have Peugeot’s still images and a short video to go by, but even so, the results appear impressive. Not only does the car’s exhaust note sound raw and raspy, its body also looks properly hunkered down. Peugeot knows how to make good handling hot hatches – the 208 GTi 30th Anniversary is one of our all time favourites – so we expect the 308 Racing Cup to be a popular choice for tin-top racing drivers.

Interestingly, Peugeot says that on-going development work should boost the 308 Racing Cup’s power output further, ensuring the finished product will be one of the most potent front-wheel-drive track cars money can buy. Pricing remains unconfirmed for now, but for reference, the outgoing RCZ Racing Cup sold for close to £40,000 when new.