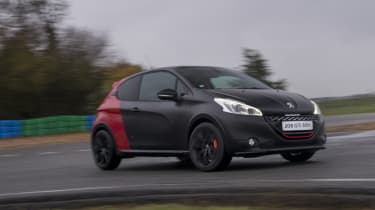 This is the sharper, more powerful version of the very capable Peugeot 208 GTi.

Like the RCZ-R coupe – which we rank above the new Audi TT for driving fun – it’s engineered and built by Peugeot Sport, the company’s motorsport division.

In between race and rally programmes, the engineers at Peugeot Sport have tuned the 208 GTi’s suspension and drivetrain with the express intent of making this the best-handling B-segment hot hatch on the market – which means Peugeot has the brilliant Ford Fiesta ST in its sights.

The 208 GTi 30th marks 30 years since the introduction of the now legendary Peugeot 205 GTi, which is still considered one of the best hot hatches of all time. If this new model is to challenge the Fiesta ST for class honours and pay meaningful tribute to the 205 GTi, it’ll have to be a very impressive thing indeed.

Power is up by 8bhp over the standard model, lifting peak output to 205bhp, while torque rises by 18lb ft to 221lb ft. That’s pretty minor stuff compared to the transmission and chassis upgrades, however.

The gear ratios have been shortened for more urgent straight-line acceleration, while a Torsen limited-slip differential has been fitted to better manage the power and torque at the front wheels; it’s the same unit that serves in the RCZ-R. A six-speed manual remains the only gearbox option.

Peugeot Sport has gone to town on the chassis. Compared to the standard GTi, the track has been widened by 22mm at the front and 16mm at the rear. The car rides 10mm lower on stiffer springs and dampers. The rear spring rates are up by some 80 per cent, which shifts the roll resistance rearwards in a bid to make the car more agile.

The rear anti-roll bar is unchanged, but the front bar is smaller to help further improve traction over the standard car. Toe and camber rates have also been tweaked to improve grip and turn-in, while Michelin Pilot Super Sport rubber gives more grip at the expense of progression in break-away.

Bigger brake discs at the front axle and Brembo calipers give the 208 GTi 30th the braking performance to match the improved dynamics. 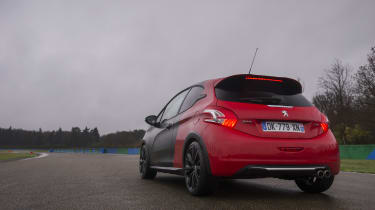 Altogether sharper and more aggressive than the standard version. The two standout differences are braking performance and traction; in these two areas the GTi 30th is a huge step on.

The new brakes bring a firmer pedal, much more initial bite and better stability, too.

The car distributes its power more effectively, which enables the driver to get on the throttle both earlier and harder, and it’ll hold a tighter line under power during cornering, whereas the standard car begins to wash wide in such conditions.

The additional straight-line performance – Peugeot claims a reduction in the 0-62mph time of 0.3 seconds, down to 6.5 – is difficult to discern on first impressions, but the sharper turn-in and reduced body roll is readily apparent. The car feels wholly more responsive and agile, with crisper and more communicative steering.

The chassis upgrades have made the GTi 30th a much more aggressive and playful car during hard driving. True to the legend of the 205 GTi, this new model will rotate off-throttle quite suddenly, in the wet at least, although such moments are easily gathered by a healthy dose of throttle.

We’ll hold back on delivering a definitive verdict until we’ve spent more time with the car – during the launch event we drove it neither on the public road nor in dry conditions – but the first impressions suggest that it’ll give the mighty Fiesta ST a run for its money. It’s certainly Peugeot’s best hot hatch since the turn of the century.

If you want to put one on your driveway you’ll have to move fast; just 800 are being built, with 100 coming to the UK – although it’s likely that we’ll see a continuation of this model under a different name.

The basic list price is £21,995. Three-quarters of all UK cars will feature the two-tone ‘Coupe Franche’ red and black paint scheme (an £800 option). Of the remaining 25 cars, 20 will be Satin White and five Rioja Red.