They were great in the early ’90s, and now, with some choice upgrades, this Peugeot 205 GTI and mk1 Mazda MX-5 offer thrills to rival modern performance cars 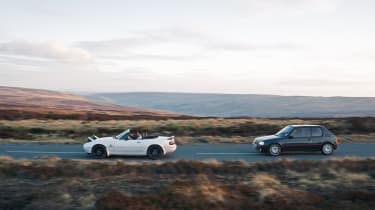 It’s the early 1990s. The Middle East is in turmoil and the resulting spike in oil prices has tipped an already fragile global financial system into a lengthy period of recession. Worse, instability in the European currency markets – fuelled largely by rapacious speculators – has forced the British government to pump billions into the Bank of England to safeguard the pound.

Fast forward two decades and you have to conclude that little has changed. It certainly looks that way from where I’m standing, for parked in a lay-by on the North York Moors are two immaculate early-’90s icons: Mazda’s pert little MX-5 and Peugeot’s perky 205 GTI. All we need to complete the time-warp illusion is for photographer Gus Gregory to open the back of his Nikon and pop in another roll of Fujichrome Velvia film (look it up on Wikipedia, kids) and I’d be 21 again.

Sadly I’ve just turned 41 and Gus is cursing at his Nikon’s full-to-bursting memory card, but the cars look as fresh as the day they were launched. However, don’t be fooled by their stock exteriors, for thanks to extensive and expertly executed upgrades, the performance of both of these born-again classics has been turned up to 11.

I’d wager many of you are familiar with BBR GTi (formerly Brodie Brittain Racing), rather fewer with Peugeot build and tuning specialist Pug1Off. By strange coincidence both are based in the Northamptonshire town of Brackley, their workshops separated by the vast Mercedes-Benz GP team headquarters. There must be something in the water.

Gus and evo chum Tim Smith have formed an advance party and headed north in the 205 GTI, so my task is to collect the Mazda and catch them up. As you may recall, BBR was the brains behind the original dealer-fit turbo conversion for the MX-5. It made for a cult car in its day, boosting the little 1.6-litre twin-cam motor from 115bhp to 150bhp. Free from the constraints of a nervous dealer network and thanks to modern electronics, better intercooling, a freer breathing manifold and exhaust and a new Garrett GT25 turbo, BBR’s new 20th Anniversary MX-5 turbo conversion (£4995 fitted) extracts 220bhp and 175lb ft of torque from the same 1.6-litre lump. I think that’s what you call progress.

Those are big numbers for a little sports car. Quite how big – and just how little – becomes abundantly clear when you climb into the MX-5. It really is a tiddly car. Indeed it initially feels one size too small as you fumble for seat and steering wheel height adjusters that aren’t there. The seat (here re-trimmed in leather by BBR, along with the rest of the interior) feels a little high and the steering wheel a little low, but with time you do become more accepting of the driving position.

The advantage of this diminutive size is a level of car-driver intimacy rarely found in a modern car. You don’t so much sit in the Mazda as wear it, which immediately makes you feel more confident about chucking it around. This demo car is a shop window for what BBR can do, so in addition to the boosted motor it has the firm’s own suspension set-up, comprising adjustable Spax dampers with BBR-spec springs that are 10 per cent stiffer all round and a little lower at the front, but not at the rear so as to preserve wheel travel. It also has the £995 option of the later six-speed mk2 MX-5’s longer-legged final drive, complete with Torsen limited-slip diff to help contain the increased engine output. Bigger – but still modest – 16in alloys fitted with 205/50 tyres complete the chassis tweaks.

It’s been an awfully long time since I drove an early MX-5, but I know they never went like this. BBR engineer Neil McKay explained that the engine is mapped and the boost controlled in such a way as to preserve the little twin-cam’s revvy character, so it still develops peak power and torque at roughly the same revs (6900 and 5100rpm respectively) as the regular motor. That’s clever, not only because it rewards enthusiastic use, but also because the extra 105bhp and 75lb ft are delivered in a progressive way. Handy when there’s no traction control.

It’s a three-hour motorway drive from Brackley to North Yorkshire. Ordinarily this would be a bit of a chore in an old MX-5, but the taller final drive, tremendous tractability and satisfying roll-on acceleration make it a surprisingly capable mile-eater. I’m not such a fan of the steering, which is lighter than I’d like and a little too responsive to initial inputs, but once up on the Moors the car flows well and feels really keen to please.

The beauty of this turbo conversion is its duality. When you’re simply making progress it’s totally mild-mannered, but when you’re really making progress it reveals an altogether wilder side. Third and fourth are the killer gears, for they allow you to really stretch the elastic mid-range torque and top-end power. It’s borderline startling how relentlessly this little car keeps pulling, well into numbers best not committed to print. Complacent Elise or Boxster drivers would be easy prey if you caught them napping.

The Mazda’s body structure feels wobbly by today’s standards, especially at speed over some of the North York Moors’ more bumpy stretches, but it’s hard to be too critical when the car weighs just 971kg wringing wet. The suspension is a great road set-up, with plenty of pliancy and reassuringly progressive limits. There’s ample grip and impressive traction, but the BBR still feels alive in your hands. It’s not the tail-happy monster you’d expect either.

If you don’t actively provoke it there’s not much to worry about, but turn in aggressively with a deliberate lift and then a timely squeeze of the throttle and it slides willingly. Once you get a feel for the boost you can balance it with the throttle, and so long as you don’t get too excited with the corrective lock it’ll adopt a nice, sustainable angle of dangle on bone-dry tarmac – something standard MX-5s have never really had the grunt to achieve. It’s a cracking car.

Stepping from the mellow and muscular Mazda into the 205 is a massive contrast. The guys at Pug1Off have created some truly remarkable cars, including a street-legal 205 GTI running a turbocharged 306 GTI-6 engine good for 500bhp and capable of 11sec quarter-mile passes at 130mph. So they certainly like their cars hardcore, but the 205 GTI 195 is far from a drag-strip or trackday special.

The heart of Pug1Off’s basic upgrade package is the 167bhp, 2-litre 16v motor from the 306 GTI-6, which surprisingly drops straight into the 205’s engine bay (with a very slight re-working of the under-bonnet slam panel) and attaches to the 205’s five-speed gearbox. For £2220, Pug1Off will perform the engine transplant, complete with new clutch, cambelt and water pump, plus the reassurance of a 12-month, 10,000-mile warranty. However, for an extra £1595 you can have the same motor uprated to full ‘195’ spec with high-lift, long-duration camshafts, a tubular exhaust manifold, a modified inlet housing and an ECU remap with a 7800rpm rev limit. That little lot delivers 195bhp – 65bhp more than a standard 205 GTI 1.9 – and with the car weighing just 895kg results in a power-to-weight ratio of 221bhp per ton. That compares rather favourably with the Renaultsport Mégane R26.R’s 189bhp per ton…

It’s hard to explain what comes over you when you drive it, but imagine a hot hatchback that thinks it’s an R400 Caterham and you might have an inkling of what it’s like. The 195 engine is magnificent, with plenty of snort and rort from 5000rpm all the way to the 7800rpm limiter, yet happy enough to work smoothly below its optimum go-zone. It sounds sensational in the upper reaches of the rev range, with a bark that’s borderline BDA and a scintillating throttle response that begs you to brrapp-brrapp every single downshift.

Such is its infectious nature you need monastic levels of self-discipline not to constantly drive it like an idiot. I can’t remember many times when I’ve driven a car and seriously thought I was going to hit the rev limiter in sixth gear, but when a deserted stretch of tarmac presents itself through the 205’s windscreen you feel compelled to give it the full Gilles Panizzi, complete with wild staring eyes and fly-catching mouth.

Davies is the first to admit the gearing on his car is shorter than Danny De Vito’s inside leg measurement. I think if I was to have one – and believe me I have thought about it – I’d definitely go for a less manic final-drive ratio, but there is something undeniably amusing about such an uncompromising set of cogs.

What’s really impressive about the Pug1Off is that deep down it still feels like a 205 to drive, just much, much quicker and far, far angrier than they ever were from the factory. The chassis balance is little short of inspirational, with a fabulously on-the-nose feeling as you turn in, yet with a seemingly infinite range of throttle adjustability all the way to the heart of the corner. The 205’s inherent brilliance can take plenty of credit, but then so too can the Bilstein/Eibach kit, which thrives on hard driving and never loses composure or control. It’s a set-up that wrings more grip and traction from a set of 195/50 R15 Toyo Proxes T1‑R tyres than you’d ever think possible, which explains why the inside rear wheel grabs air at every opportunity.

This car has power steering – quite a rare feature on 205s – but it delivers minimal assistance and maximum feel, so you can chuck the Pug into quick or slow corners with equal confidence. And because you know exactly what each end of the car is doing, the 205’s infamous lift-off oversteer is something to be exploited rather than feared.

Gripes? Well, just as in the 306 GTI-6, the longer six-speed gearbox casing means the turning circle is pretty restricted, and I’m not sure the short-shift kit adds much, apart from a stiffness I don’t recall in the standard ’box. That’s a pretty inconsequential list of cons when you’re talking about perhaps the most exciting front-wheel-drive car you’ll ever lay your hands on.

Two days and 600 miles in each of these cars has delivered some of the best driving I’ve enjoyed in donkey’s years, a fact which accounts for me trawling the online classifieds when I return home. After extensive research, I learn that two to three grand will find you a nice, standard example of either car. Take your 1.9 (or 1.6) GTI to Pug1Off and it will build you a copy of Mark Davies’ magnificently manic car for £10,128. Or you can complete the transformation in stages as and when your finances allow. The same goes for the MX-5, to which BBR will fit the turbo conversion, suspension kit and interior re-trim along with the taller final drive, slippy diff and bigger rims for around the same £10K spend. That seems like a pretty good deal for a pocket-sized rear-drive sports car that’ll hit 60mph in 5.5sec and touch 140mph.

The purists amongst you might dislike the idea of turbo kits and even engine transplants in what are two already great little cars. Others might think it’s crazy spending this kind of money when you can find really serious second-hand metal on a similar budget. Ultimately you find the notion of these born-again icons either totally bewitching or utterly nonsensical. Me? I’d have either one of them like a shot.