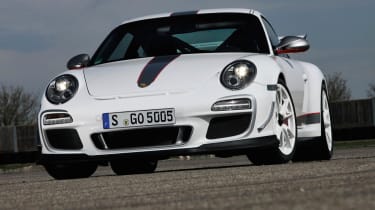 The ultimate Porsche 911 GT3 RS. With 493bhp, it’s got the most powerful normally aspirated engine ever to be fitted to a 911. It also features carbon body panels, an increased level of downforce and a revised suspension set up with uniball joints on the lower rear arms just like the 911 GT2 RS. The 3.8-litre GT3 RS is our current Car of the Year and Porsche has just made it better.

Project boss Andreas Preuninger describes the project as having been ‘built around the engine’. The swollen capacity of the Metzger flat-six has come from a stroke increase, and it now has exactly the same crank as the GT3 R and RSR race cars. Air flow has been improved and there are numerous strengthening upgrades too. In terms of suspension, it has unique spring, damper, toe and camber settings along with rose joints, and thanks to the liberal use of carbon it has less weight to deal with - just 1360kg - barely any more than the racers.

Stunning. Perhaps this comes as no surprise considering the starting point, but every aspect of the GT3 RS has been built on. The engine is nothing short of incredible; on the road it impresses with is flexibility and overall smoothness as much as it does with the power at the top end. If you expected a little lumpiness at lower revs, think again; it’s more tractable than the 3.8 and there’s a delicious kick as you head to 8500rpm. In terms of handling it is noticeably sharper in its responses (and it was hardly sluggish before), but the ride remains utterly composed. Track-bred machines are not supposed to be this compliant on a B-road. Oh, and as you might expect it’s devastatingly fast across the ground too.

To what? It is the ultimate 911, and you could easily argue it’s all the car you’ll ever need. It will become an icon.

It’s the last of the 997 GT3s and everything Porsche has learnt along the way has gone into this send-off model. Only 600 will be made (seven per day over the next six months) and only 40 will be coming to the UK.