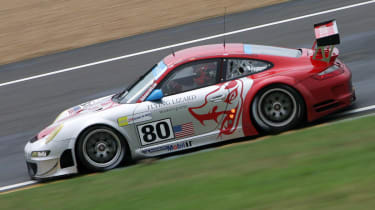 Porsche will have a strong presence at the 2010 Le Mans 24 hours – six 911 GT3 RSRs will be taking part. While Porsche doesn’t compete at the legendary race with a factory team, customer and privateer teams from Europe and the USA will be entering 911s in the GT2 class. They’ll be battling some strong opposition from Ferrari, Corvette, Aston Martin and BMW, with its M3 GT2 Art Car. Out of the six Porsches running, the one to watch is BMS Scuderia Italia’s. The Number 97 car will be piloted by the reigning FIA GT champion (and Brit) Richard Westbrook, alongside Porsche Junior Marco Holzer and double DTM touring car champion Timo Scheider. Porsche has 16 overall victories in Le Mans since 1970, and is the race’s most successful manufacturer. While these 911s won’t be challenging for outright race victory, Porsche works drivers Timo Bernhard and Romain Dumas will be racing an Audi R15 TDI in the title-chasing LMP1 sports prototype class.