Porsche unveils a four wheel drive version of its run out edition 997, the 911 Carrera 4 GTS 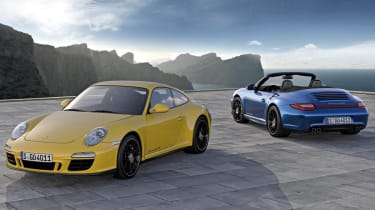 Porsche has revealed its latest 911, the Carrera 4 GTS. It’s a four-wheel-drive version of the Carrera GTS that was thought to represent a run-out special edition for regular, non-GT3 911s. Its good reception – ‘for all-round performance, value and desirability it’s our favourite non-Motorsport department 911’, said Richard Meaden – has no doubt spurred Porsche into extending its run with an all-wheel-drive incarnation.

The Carrera 4 GTS uses the same engine as the Carrera GTS, a 402bhp 3.8-litre flat-six which is a development of the 911 Carrera S’s 380bhp unit. With Porsche’s twin-clutch PDK gearbox fitted, it can shift the C4 GTS coupe to 62mph in 4.4sec, the cabriolet 4.6sec, identical to the Carrera GTS’s figures. No top speed has yet been revealed, but it’s likely to be around 190mph. Despite possessing over 20bhp more than a standard Carrera 4, the GTS manages identical economy figures, Porsche boasts. That means a combined 26.9mpg from the coupe with CO2 emissions of 247g/km. The GTS differs visually from normal Carrera models via its 19in RS Spyder alloy wheels, a ‘sport design’ front apron and black detailing for the spoiler and side skirts. There are also a pair of sports seats and flourishes of black Alcantara for the interior. The Porsche 911 Carrera 4 GTS goes on sale in the UK in July 2011, prices starting at £83,145 for the coupe and £90,024 for the cabriolet. These are rises of around £2000 over the regular Carrera 4S and £5000 over an equivalent two-wheel-drive Carrera GTS.

A brand new, 997-replacing incarnation of the Porsche 911 is set to be revealed at the 2011 Frankfurt motor show in the Autumn.