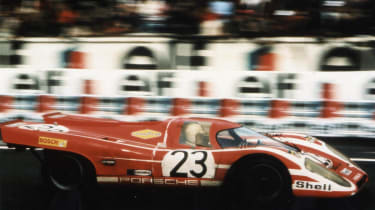 Porsche is returning to Le Mans. The German car maker is the most successful marque at the 24-hour race, with 16 overall victories. And from 2014 it will once again be challenging for honours with a sports prototype in the top LMP1 category. It comes days after a Porsche 911 once again clinched victory at the Nurburgring 24-hour race, courtesy of Manthey Racing, while Porsche’s hybrid 911 finished the race for the first time. It’s a huge hint that a return to the Le Mans big time would be with a hybrid-powered Porsche RS Spyder racer. The diesel Audi and Peugeot LMP1 cars currently dominate the race’s top positions, so alternative power seems likely. Any decision on how the new Porsche racer is powered will be heavily influenced by what the race regulations are set to allow in three years’ time, however. Hartmut Kristen, head of Porsche Motorsport – ‘Now we will begin with detailed research in order to evaluate the various concept alternatives for our new car. These obviously depend on how the regulations for the year 2014 look in detail. In principle, these regulations are interesting for us because the integration of our hybrid technology in the vehicle concept is one possible option.’ Porsche last won the Le Mans 24-hour race in 1998 with the legendary 911 GT1 of Allan McNish, Laurent Aiello and Stephane Ortelli. McNish currently drives Audi’s LMP1 car, and was quick to welcome Porsche’s return via Twitter – ‘Great news about Porsche back in LMP1 at Le Mans, looking forward to good hard competition from the boys from Flacht.’