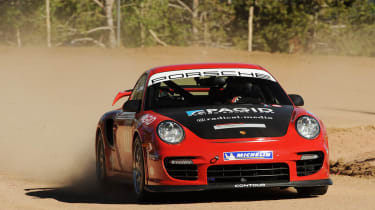 American Jeff Zwart has broken the production car record at Pikes Peak in a barely modified 911 GT2 RS. Before tackling the 12.4 mile course, Zwart drove the car 1100 miles from Porsche Motorsport in California to Colorado. His time of 11:07.869 was 24 seconds quicker than his run last year in a GT3 Cup.

Rod Millen, outright course record holder for 13 years, was the only man to beat Zwart in the 2wd class, driving a competition-spec Hyundai Genesis with over 700bhp. Despite that, he was only three seconds quicker.

Subscribe today to have every issue of evo delivered straight to you. You'll SAVE 39% on the shop price, and get evo for its original cover price for a whole year!
Subscribe now
The overall record was set by Nobuhiro 'Monster' Tajima in his 900bhp-plus Suzuki SX4 Special, posting an overall time of 9:51.28, making him the first person to conquer the course in under 10 minutes.
Follow us on TwitterFollow us on FacebookEmail us