We’ve already told you about the new Porsche 911 Cabriolet, but now the finished production car has made its debut at the 2012 Detroit motor show. 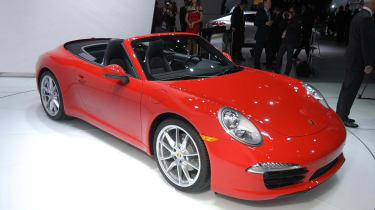 We’ve already told you about the new Porsche 911 Cabriolet, but now the finished production car has made its debut at the 2012 Detroit motor show.

And yes, it really does stick to the script. Open-top 911s have been a vital part of the model line-up pretty much since the beginning, and the new cabrio carries on where its predecessor left off with a folding fabric roof that can be raised or lowered beneath the rear deck in just 13 seconds. The hood uses a clever magnesium frame to save weight.

Engines are shared with the coupe, meaning a choice between a 345bhp 3.4-litre engine and a 3.8-litre with 393bhp, and carrying ‘S’ badging. Only rear-wheel drive will be offered from launch, but it’s a sure bet that four-wheel driven versions will follow shortly afterwards. The 3.4 will cost £79,947 and the 3.8 will cost £89,740 when the car goes on sale in March.