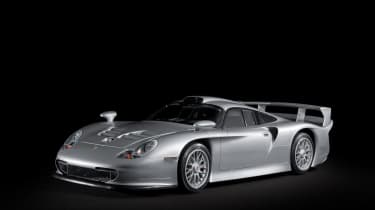 A rare breed, the 911 GT1 was built as a homologation special, between 1996-1998 to satisfy the rules for GT1 endurance racing at the time. The GT1 based loosely on the 993, with much of the rear-end taken from the 962 Group C racing car.

The car here was built in January 1998, and originally sold in Germany, but was imported to the USA under strict ‘Show and Display’ restrictions in 2003. This means that although the car is technically a road car, it could only be used on track or for demonstration runs. The car has recently undergone a major service, and will be sold with just 7,180 kilometers on the clock.

Interestingly, the same RM sale is offering a 1998 Mercedes-Benz CLK GTR - the closest thing to a direct rival for the GT1. It was Mercedes’ 720bhp road-going homologation special for its own GT1 race car.