A Rolling Museum will celebrate 50 years of the Porsche 911 and more, with appearances at Le Mans, Mille Miglia and Goodwood 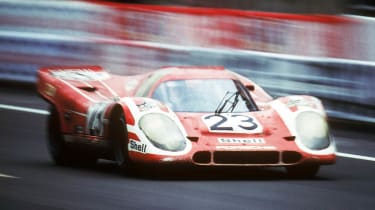 Porsche will celebrate the 50th anniversary of the 911 with several key appearances by its ‘Rolling Museum’ in 2013. Highlights include the Goodwood Festival of Speed in July and a visit to the Le Mans 24-hour race in June.

Preceding Porsche’s visit to England will be an appearance at the ‘Langenburg Historic’ in April, where Le Mans 24-hour winner Jurgen Barth will drive the Porsche 718 W-RS Spyder. Next, the Porsche Museum will travel on to Italy to participate in the Mille Miglia. Cars scheduled to compete in the 1000-mile event include two 550 Spyders, two 356 Coupes and a 356 Speedster.

Another important date is Le Mans on June 22 and 23. Porsche has 16 overall victories in the 24-hour endurance race – which is 90 years old in 2013 – and will celebrate this with appearances from a 1987 Porsche 962 and the #23 Porsche 917KH which was driven to Le Mans victory in 1970 by Hans Hermann and Richard Attwood.