Porsche’s fearsome, one-off 961 racer, arguably the ultimate 911, hasn’t been used in anger since it caught fire at Le Mans in 1987. Now it’s about to run again, with Roger Green behind the wheel 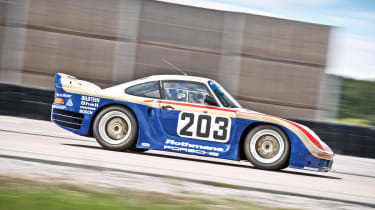 At around 10am on June 14, 1987, the short career of the only all-wheel-drive car ever to compete at Le Mans came to a sudden, fiery end. For the 199th time in the race, the 959-based 961 had ripped its way towards Indianapolis corner at over 200mph with its pair of monstrous KKK turbos spinning hard to squeeze 1.2bar of boost into the Group C-spec, 2847cc, water-cooled, flat-six motor and fire 680bhp at four massive Dunlop slicks.

Its driver, Dutch-Canadian Kees Nierop, hit the brakes at exactly the same point as he had throughout his previous seven stints during the first 18 hours of the race, only this time as he dropped from sixth gear to fourth he pulled the lever a fraction too far across the gate, slotting second at 180mph. Nierop registered his mistake the instant he began to release the clutch and in his peripheral vision saw the tacho needle flick around the dial.

He dipped the clutch pedal back in with reactions so fast he avoided blowing the motor to smithereens, but it wasn’t enough to avoid locking the rear tyres. The 961 swerved hard left into the guard-rail, smashing composite panels at the car’s front and rear as it spun down the grass. When it finally came to a halt, the engine was still running and, other than the obvious bodywork damage, the chassis was surprisingly still in good shape, so Nierop wasted no time and headed for the pits.

What happened next was captured on TV (look it up on YouTube) and watched in dismay by team manager Peter Falk from the pitlane. He immediately got on the radio. ‘Stop the car and get out!’ was his urgent instruction, for, like the rest of the worldwide television audience, Falk could see something the driver couldn’t. Flames. At the back of the car, broken bodywork had been crushed onto the red-hot turbos and it was already alight. Nierop pulled over and clambered out, but he was between two marshal posts. By the time the extinguishers arrived, the million-dollar machine was fully ablaze.

Neither Nierop nor another four-wheel-drive car would race at Le Mans again, but that wasn’t the end of the road for the one and only 961, a car that had so impressively demonstrated its potential by finishing seventh overall the year before. The charred remains were returned to the factory and over two years the car was rebuilt to exactly the same condition as it had been for the start of the race. Since then it has been stored and displayed in the Zuffenhausen museum, but it hasn’t been seen running in public  – or been driven by anyone outside the employment of Porsche AG.

Until now. In the run-up to the 2011 Goodwood Festival of Speed, I hear from Porsche that seven-times Bathurst 1000 winner Jim Richards will drive the 961 up the hill. But as he won’t be there on Friday morning, there’s a slot for someone less garlanded to have a go…

This is clearly not the time to remind the guys at Porsche of my own history of jumping out of burning race cars (see the 2010 edition of the Nürburgring 24 race, evo 146), so instead I hot-foot it over to the Porsche test track at Weissach for an acclimatisation run.

And there it is, sitting in the middle of the steering pad, looking utterly, brilliantly, fabulously nuts, in the exaggerated way that only cars from the ’80s can. Like a 911/962 lovechild, it has a wide-stance chassis but a narrow body that sits comically upright and tall with huge overhangs, while massively wide sills connect those formidably mushroomed arches. It should look awkward, but boy does it work.

Removing the elongated tail reveals why the 961 was stretched and why it caught fire. Stuck right out the back are two massive turbos connected to fat, stubby tailpipes and monumental air scoops. This is one of the least subtle machines I’ve ever seen. It’s fantastic.

To get aboard, you clamber carefully over the Rothmans-Porsche-logo’d sill and drop into the comfortably padded bucket seat behind a thick-rimmed three-spoke Momo wheel. The driving position is not unlike that of the 959, only here the dash is covered haphazardly in dials, switches and warning lights. Right ahead of you is that large tacho dial, twisted in its housing so that peak revs are at the top. To the right, in yellow, is a boost gauge. On the floor there’s a huge adjustable dial to wind up the boost for qualifying, and there’s also a ‘push-to-pass’ button on the wheel, but it’s unlikely that I’ll be needing that on the Earl of March’s driveway.

It starts first time, bellowing into life with a stab of the small starter button. It’s the deep, gruff sound of raw, unsilenced, intimidating power and it reverberates around the cabin with such intensity you feel it. The clutch has weight but it’s not overly heavy and the gearbox is easy on the arm. First is on a dog-leg but it has a synchro and slots in effortlessly, and after a couple of gratuitous blips of the throttle I ease out the clutch and we’re moving. Slowly at first, even with the throttle fully open. The 961 still has its Le Mans cogs inside the gearbox casing and this car ran before the Mulsanne straight was interrupted by chicanes (it went through the speed trap at 201mph in qualifying back in 1987). Combine that with heroic levels of turbo lag and it takes its time building things up.

And then as it hits 4500rpm the power arrives. All of it. The 961 leaps forwards, like we’ve gone from 40 to 60mph with no incremental speed in between. Into second, the power keeps coming, but I soon have to back off to stay within the tight circle of the pad.

One week later, I experience the same extraordinary launch, this time from the Goodwood start line. The engine bogs down almost to the point of stalling as I drop the clutch at 4000rpm, but then the incredible spooling begins.

Wham! By the time I’ve got to the top of second gear I’m already at the first corner. A dab of brakes, turn-in, get back on the power early to stay on boost and the 961 hooks it all up.

As soon as I alter the throttle angle, the car reacts, taking a new, slightly tighter line. This is the four-wheel-drive system doing its thing. The 961 may have had a short competitive life, but it was a technology test-bed both for four-wheel drive and water-cooled cylinder heads. The current 911 Turbo S owes a lot to this machine.

In front of the house, I get up into the top echelons of third gear and it feels really fast and properly hairy. It’s almost too imposing a thing to hustle along such a narrow, twisting, bumpy hill climb, but I’ve only got the one run so I’m determined to open the taps at every opportunity.

Blasting out of the tricky Molecomb corner, I wonder if Lord March has ever thought about selling up and moving to Mulsanne. Yet while he may not have a flat-out 200mph kink, he does have an intimidating flint wall and it passes in a blur of grey on my left. Back on the gas for one last burst between the hay bales, then I grab fourth as I run under the finish gantry. It’s taken about a minute, but it’s a minute I’ll never forget.