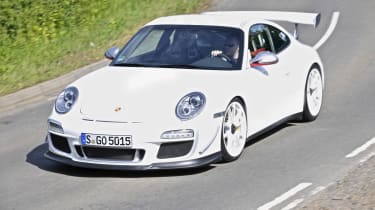 Porsche Carrera Cup GB racer and former FIA Formula 2 champion Dean Stoneman’s recovery from cancer was documented in evo 184, and now Dean is a contender to win the Carrera Cup in his comeback season.

New sponsor Bike It (bikeit.co.uk) has joined Dean and his Redline Racing team for the rest of the season, but they don’t have a car livery as yet. And that’s where you come in. Dean and Bike It are offering evo readers the chance to design the livery that will appear on his car for the remainder of the season. The creator of the winning design will receive two VIP passes for a Porsche Carrera Cup GB round of your choice, with pitlane access.

The liveries will be judged by Dean, Bike It and evo’s design team, and the winner will be announced in time for the car to be wrapped for the next round at Snetterton on August 3/4. They need to include the Bike It logo, illustrated right.

The closing date is July 22. A picture of a blank Porsche 911 GT3 - representative of Dean's racing car - is above. You can download 911 drawings via this link - CLICK HERE - with which you can design your livery in illustrating software, such as Adobe Illustrator or Photoshop. Send entries as a low-res jpeg (no bigger than 700 KB), but create your designs as vector graphics or as hi-res as possible. If you win we'll want your original files to create the wrap for the car from.

Alternatively, print out the sketches and design by hand, either scanning in and emailing your design, or posting it to us the good old fashioned way.

Emails should be sent to eds@evo.co.uk with the subject line '911 livery' while if you want to post them, send them to...