Technology from the Porsche 918 Spyder looks set to reach the Panamera, 911, Cayman, Boxster and more 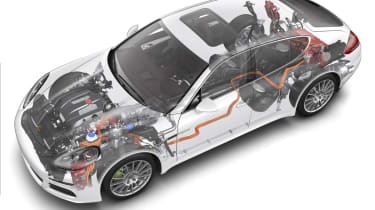 ‘The 918 Spyder is the gene pool of Porsche sports cars of the future.’ With those words, Dr Gernot Dollner, Porsche’s director of the Panamera product line and 918 project leader, introduced a technical presentation of the new plug-in Panamera S E-Hybrid, part of Porsche's plans to transfer the plug-in hybrid technology from the 918 Spyder to the rest of the company's models.

Although the new hybrid Panamera has up to 410bhp and 425lb ft of torque at its disposal (and a 0-62mph time of just 5.5sec), this two-tonne car is subject to minimal taxation thanks to its 71g/km emissions rating – a figure that also exempts it from the London Congestion Charge. However, even though this car won’t arrive in the UK until the summer, its hybrid componentry is already ostensibly out of date, as Porsche has a much-improved electric motor ready.

The Panamera’s electric motor produces over 90bhp, but the next-gen unit will put out closer to 130bhp, as well as 300lb ft of torque from a standing start. Given that the Panamera S E-Hybrid can, on electric power alone, accelerate to 30mph in 5.1sec and cruise at 84mph, this bodes well for future models. The next-generation system, as used in the 918, features both water and air cooling to help enhance its performance while minimising weight gains.

Weight is still an issue for electric propulsion, though, and it’ll play a bigger part in the smaller models this hybrid technology could reach. Porsche engineers admit that in the short-term it’ll be difficult to reduce the weight of electric motors or batteries while maintaining performance and range targets, so the wiring harness and other car components are being scrutinised for savings instead. The distribution of that weight is just as important; the 918 Spyder was designed around its powertrain, but that may not be possible with other models as conventional engines will remain the bigger sellers for some time yet.

Porsche also used the introduction of the hybrid Panamera to present its new measure of efficiency: engine revolutions per kilometre. In effect, the fewer revs needed at any given moment, the better. That admittedly doesn’t sound like a recipe for evo cars, but Porsche is keen to stress that this development should not come at the expense of emotion or performance.

Plug-in hybrid technology significantly reduces the engine revolutions per kilometre quotient, but the next step holds a glimmer of hope for driving thrill-seekers. Porsche intends to use GPS data, including the radius of bends and the elevation of hills, to help cars automatically choose the most efficient driving mode. This data isn’t likely to reach the mass market for four years, but there’s no reason why this information couldn’t also be used to enhance the driving experience, too.