Want to see the full un-edited video of the Porsche 918 lap the Nurburgring in 6:57? Step this way... 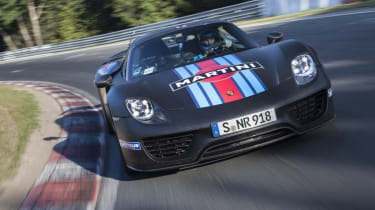 Porsche has been back to the Nurburgring with the 918, and has set a lap time of 6:57 – breaking the record for an internationally homologated road production car. The average speed for the whole lap, which was anounced at the Frankfurt motor show, was 111mph.

The car was driven by Porsche test driver Mark Lieb, and managed the time on a set of standard Michelin Pilot Sport Cup road tyres with the optional Weissach performance package.

To put the speed of the lap into perspective, it is about one second quicker over the 12.8-mile lap than the 1975 Formula 1 pole-position lap set by Niki Lauda in the Ferrari 312T.

There’s still question as to whether McLaren will take the fight to Porsche with the new P1. Sheer numbers would suggest that the P1 could be even quicker than the Porsche, but only time will tell.

Here’s the onboard video of the full lap: