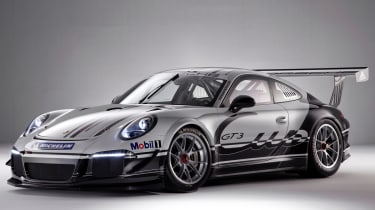 The 991-spec Porsche 911 GT3 Cup race car made its UK debut at the Autosport International show ahead of its adoption into the Porsche Carrera Cup Great Britain this season.   Replacing the 997 model, the 991 adopts an aluminium chassis, as well as the ability to remove front or rear sections that are damage and bond on fresh ones. The 453bhp machine also carries a paddleshift (six-speed) for the first time, as well as a safety hatch in the roof to aid emergency crews when attempting to extract drivers from the car in the event of an accident.   The series has had issues in the past where larger drivers were disadvantaged, but series co-ordinator Marion Barnaby says this situation has been resolved thanks to regulation changes from Porsche: ‘We used to have a minimum weight of 1170kg, but we’ve now changed that to 1280kg including the driver, so we hope that will bring some of the older drivers back into the series.’   The new car is priced at £144,000, an increase of just over £20k on the 997 model. The series will again race on the British Touring Car support bill, but is to skip the June meeting at Oulton Park in favour of a joint race with the French series over eight laps of Le Mans, on the morning prior to the start of the 24 Hours on June 14.