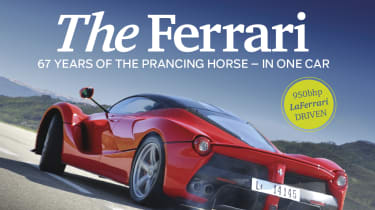 Buy a copy of evo 197 in our online shop

NEWS Buzz Lightyear quotes at the ready: we’ve got an in-depth look at Infiniti’s sportiest saloon yet. Plus, insights into Formula E and the Le Mans 24 Hours

FIRST DRIVESThe BMW i8, Porsche Cayman GTS, Volvo V60 Polestar, Subaru WRX STI, Audi S1 and Citroen DS3 Cabrio Racing are all put to the test, with an evo five-star badge of honour holder amongst them…

FERRARI LaFERRARIThe arrival of the LaFerrari ensures the Porsche 918 and McLaren P1 finally have a rival from the most iconic supercar maker of the lot. But is the Enzo’s successor fashionably late, or will it struggle to play catch-up? Richard Meaden pushes it to its limits on road and track in Italy

CORVETTE vs PORSCHE 911Chevrolet’s latest Corvette, the Stingray, looks like being the most accomplished yet on European roads, and if the YouTube commenters are correct, it’s borderline unbeatable. Its arch-rival, the Millbrook Proving Ground, a Vbox and a healthy dose of mathematics put that bold claim to the test

LAMBORGHINI HURACÁNAn evolutionary cloak hides revolutionary tech, but does the sophisticated Huracán smother the slightly crackers Lamborghini DNA or enhance it? Jethro Bovingdon digs deep beneath the surface to find out

BMW M4 v JAGUAR F-TYPE S COUPEA lot has changed since BMW’s core M-car first entered £50,000 territory. It’s gained not only another six grand or so, but a rather drool-worthy new rival from dear old Blighty

TVR SAGARISOur new road tester used to keep a picture of a TVR in his wallet. We indulge his inner nerd by letting him drive the greatest Trevor of the lot

DOWNFORCE DEMYSTIFIEDExplaining the science behind the holy grail of cornering speed: downforce. It’s not just witchcraft, we promise

EVO KNOWLEDGEA guide to a heavenly road in western Scotland, and advice on how to buy a Jaguar XFR just like the one we drove there during eCoty 2009

ART OF SPEEDLamborghini’s new Huracán ensures the engine-cover louvres of its Miura ancestor are alive and well. We look back at the original – and its imitators

Buy a copy of evo 197 in our online shop