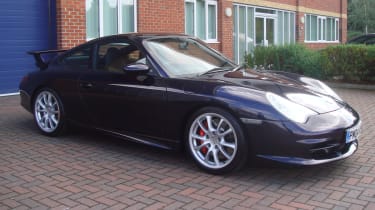 With the original 996 GT3 hardening in value recently, perhaps now is the time to take another look at the later, mk2 version, as they’re almost the same price in today’s secondhand car market. Introduced in 2003, the main changes over the mk1 were a slight increase in power, suspension upgrades, a revised rear spoiler and the later 996 headlights, apparently modelled on a fried egg.

It was the suspension revisions that proved controversial as they gave the car an even stiffer ride than the mkI – fine for track use but a bit of a pain on the road. Then again, if you plan to use your car on track then perhaps you’re better off with a mk2 anyway.

This particular car (which is in Comfort spec, so no roll-cage) has had three owners from new and comes with an excellent history. This includes servicing bills for £892 (April ’07) and £1624 (September ’07 including new brakes). In May ’08 the car got a new owner who had it serviced that September (£1111.28 including brakes again) and also had a Pioneer HD3 sat-nav/audio unit professionally fitted for £1505. The most recent service was in May 2009 when all the tyres were replaced, a chassis alignment carried out, the front crankshaft pulley seal replaced and a new battery fitted, total cost £3321.

Despite the bill for a chassis alignment, on our test drive something didn’t feel quite right at the rear, so you might want to get an independent inspection for peace of mind. There was also brake-rumble from the non-standard front discs. The characterful engine felt as wonderful as ever, though, the drivetrain as tight as you’d expect.

With thanks to vendor Dove House Motor Company (www.dovehousecars.com)

• Exterior Very good – no marks on the paintwork and the wheels are excellent • Interior All good, though the non-standard audio unit looks a bit out of place • Mechanicals Excellent, with a comprehensive service history • Should I buy it? Understated colour will appeal to some, and the low mileage is attractive too.• FOR: The mk2 996 GT3 was evo Car of the Year in 2003• AGAINST: Just how hard has this car been used on track?