Richard Meaden charts the journey of the iconic Porsche 911 and its half century automotive evolution... 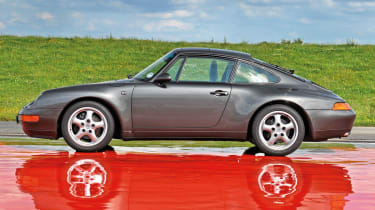 The 993 is the first generation of 911 I really got to know as a full model range, as I group-tested pretty much everything from Carrera to GT2 on Performance Car. It still looks cracking today: lithe and curvy compared to its predecessors, in much the same way the 991 is to the 997 and 996.

After the 996, first impressions are dominated by your proximity to the upright windscreen, the small dimensions and the old-school interior and switchgear. The air-cooled motor has so much character compared to the water-cooled ones, whirring and purring in unique style, but with 268bhp it doesn’t have the immediate pace of the 996. This 993 is a tip-top example, but still it feels soft and imprecise, which shows how your memory can play tricks. It’s not recalcitrant or obstructive, but it does require you to put thought into what you’re doing in a way the newer cars don’t.

Bovingdon, who ran a 993 Carrera as a (second-hand) evo Fast Fleet car in 2005, has equally mixed feelings: ‘Received wisdom is that this is the air-cooled 911, making the 964 feel archaic and ordinary, but I’m not so sure. For me it lacks a bit of steering feel compared to the 996. It also hasn’t got the throttle response you’d like, nor the incredible front-end accuracy that characterises the water-cooled cars. I love the brakes, that uniquely mechanical gearshift and its looks, but it’s not the standout I was expecting.’

And on that bombshell…