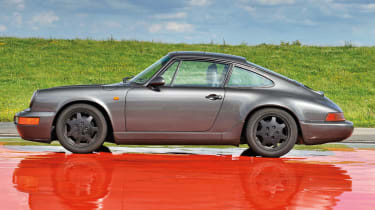 Like the 996, the 964 is commonly held in lower regard than other 911 generations. But why? I’m not entirely sure, not least because it looks great; fist-tight and truly compact, it’s a proper 911. OK, the front bumper looks heavy, but the slim hips, upright screen and round headlamps give it a timeless silhouette.

It feels tough as old boots, shot through with that sense of bombproof solidity only found in German cars of a certain age. It’s a bit basic in some areas, but that sense of functionality prepares you perfectly for the driving experience to come.

It’s hard to explain how potent this car feels, especially when the spec sheet says it has less than 250bhp. It really does have thumping performance, rich with torque and spiced with a dry-edged rasp that is – to my ears, at least – one of the great engine notes of any car.

The power steering feels sharper, weightier and more precise than the 993’s. There’s more chat too, from both ends of the car, and for the first few miles you have to concentrate to decipher the white noise from the important information. There’s a stronger, more linear connection between your inputs and the car’s responses than in the 993. There’s plenty of grip to lean on and when you begin to work it, the handling balance is beautifully expressive.

You have to be more positive and confident than in the newer cars because you’re more aware of that rear-slung engine, but it’s an engrossing process and one that – thanks to power steering – is more immediately exploitable than my 964 RS with its heavy, unassisted steering.

Bovingdon has also found it to be pretty special: ‘The engine sounds terrific and really pulls hard. It has that same creamy torque as the 964 RS and here, thanks to power steering, you feel liberated to really work it hard, get the car floating between a bit of understeer and full-on oversteer. It’s got those modern 911 traits of strong, consistent brakes and a positive, if long-throw ’box, plus mini-supercar grunt and tiny dimensions for agility and an aggressive but controllable balance.’