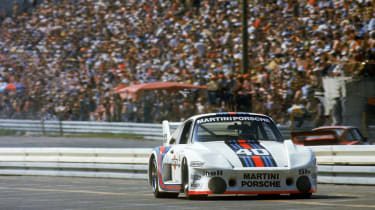 Porsche has released unedited on-board footage of American racing driver Leh Keen lapping Leguna Seca in a 935 K3 racer. The model, which was a racing version of the 930 911 Turbo road car, first raced back in 1979 - this K3 was built in the following year. Filmed here at the 2015 Rennsport Reunion classic event, it was the fastest of its class during qualifying, and this on-board footage reveals just how much work went into stringing that pole lap together.

Leh appears to have adopted the traditional rear-engined 911 driving style, which is to fight corner entry understeer and sharp power oversteer by sawing away at the 935’s three-spoke steering wheel, all to the silky soundtrack of its turbocharged flat-six engine. The unit produces in excess of 700bhp, and sends power to the rear wheels through a four-speed manual gearbox. As demonstrated by Leh, it works best with heavy-footed heal-and-toeing.

This 935 K3 is a third-generation evolution model developed by German racing team Kremer. Though Porsche had updated the 935 with factory 935 Evolutions, it initially hesitated to offer them to privateer racing teams, leaving them disadvantaged. Kremer therefore decide to develop its own updates for the 935. The K1, short for Kremer Type 1, debuted in 1976, before being succeeded by the K2, K3 and K4.

The K3 proved to be the most successful model, winning the 1979 Le Mans 24 Hours, beating its GT competitors (including factory run 935s, like the one pictured above) and the entire prototype class in a race shrouded by heavy rain. It was the first time a racing car based on a production model had won the race outright this side of World War II, a feat that only the McLaren F1 has managed since.

In all of its guises, the Porsche 935 was a dominant force between 1976 and 1982, and it probably would have gone on win in subsequent years had the FIA not introduced new GT class regulations ahead of the 1983 season. Like the one in the video above, several 935s still compete around the world in classic racing championships and events.

For those of you after more 935 on-boards, here's footage of Leh Keen proving that this K3 is far more than just a one-lap machine.