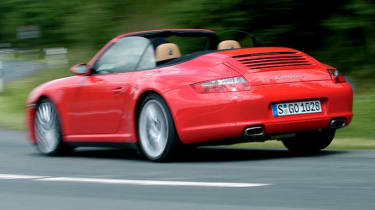 Another day, another Porsche launch - no wonder the PR folk look frazzled. I can't think of a more prolific manufacturer, although the cynical might suggest that Porsche could easily have launched the rag-top version of the four-wheel-drive C4 and C4S at the same time as the coupe models were wheeled out. Still, there's the hardcore element who'd never entertain the thought of a Porsche without a tin roof, citing the minimal dynamic superiority of the coupe as a compelling reason for not looking at the cabriolet. You guys should stop reading now, because you're never going to like this car. The rest of you, however, might care to learn that as all-weather high-performance convertibles go, the C4 Cab is unbeatable. As with the coupe there's the choice of a 321bhp 3.6-litre flat-six and a 3.8-litre with 350bhp, both of which are fabulous. And as with the coupe, the all-wheel-drive transmission shunts between 5 and 40 per cent of the torque to the front wheels, depending on circumstances; in the dry it's like cornering on slicks, in the wet (or worse) you have the confidence to push even harder than you would in a PASM-equipped two-wheel-drive Carrera. The convertible part of the equation is executed with similar aplomb. Scuttle-shake is all but banished, the Cab looks reasonable hood down or up and the roof stows and rises with speed (20sec either direction) and ease, plus the heater and hi-fi are up to the task of 100mph-plus cruising. What really clinches the deal with the Cab is the clarity with which you can enjoy the engine and exhaust's aggressive tone. The C4 and C4S Cabs cost £4650 more than their rear-drive counterparts; for those of us who aren't racing drivers, the extra expense, especially for winter driving, is worth it.