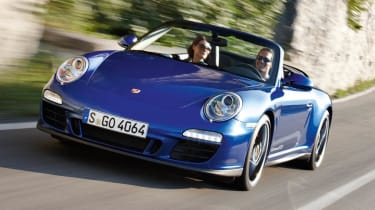 The wider 911 body normally reserved for more potent models, such as all-wheel-drive 911s and the GT2 RS and GT3, houses the regular 997.2 Carrera S’s 3.8-litre flat-six engine. This gets the usually optional Power Kit as standard, boosting its output by 22bhp to 402bhp. PASM - active suspension management to you and I - is standard, as is a sports exhaust. A six-speed manual (which we drove) is standard with Porsche’s PDK twin-clutch transmission an option.

The Carrera GTS Coupe is our favourite non-motorsport Porsche 911, and this is our favourite Cabriolet. A five per cent hike in power doesn’t sound huge, but it’s noticeable, while the torque curve is fatter, making the flat-six sharper throughout its rev range. The engine is a belter, and you can feel how much development and honing it’s benefited from. And with the sports exhaust button pressed, hanging onto every rev is rewarding, too.

All the controls are as deliciously weighted as ever, responsive and precise pedals and steering always keeping you involved. The front end is hugely communicative and the wider rear feels unfailingly planted, even in wet weather; you can’t fail to have confidence in the GTS’s immense grip levels, though this might disappoint some who’ll need to push that bit harder to intentionally breach them. On rougher roads you’ll sense a bit less rigidity that tells you you’re in a soft-top rather than coupe 911, mind. 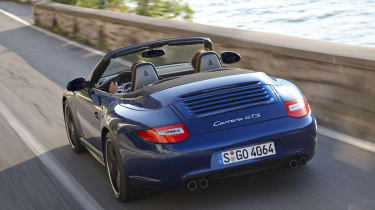 A supple ride helps make a fine long distance cruiser, and its Autobahn performance is particularly impressive: 150mph cruising is safe and comfortable, while we saw a speedometer-indicated 199mph before having to brake for traffic, with the engine having a bit more still to give.

The only other drop-top sports car with dynamics to match the 911 is Audi’s R8 Spyder, which in V8 form costs over £10K more (£96,595) while delivering mildly better numbers (424bhp, 317lb ft). It weighs more though, and is less practical, with no rear seats. Sounds and looks more like a supercar, though.

Some would argue that if you’re going non-hardcore and buying a 911 Cabriolet, the cheapest, £75K, 340bhp Carrera 3.6 is your best bet. The Carrera GTS does make for a more compelling looking and driving car, though.