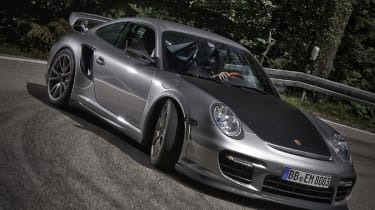 The base engine is identical to the 997 GT2 (which is no longer built), but runs different turbochargers, new intercoolers, new pistons and a new engine management system to run 1.6 bar of boost, over the last cars 1.4bar. Claimed performance is of the ‘what-the-hell’ variety with 0-62mph in 3.5sec, 0-100mph in 6.8sec and a ‘Ring lap of 7min 18sec.

The chassis is basically slightly up-rated GT3 RS, which is a pretty solid base. There are a few adjustments to fit this turbo application and for even better response the rear axle has more solid linkages than the GT3 RS.

Aerodynamically, it’s quite similar to the 997 GT2, but runs a new splitter, new rear diffuser and an extra gurney on the rear wing. Doesn’t sound like much, but it nearly has as much downforce as the GT3 RS. All that carbon, plus plastic rear and side windows shave 70kg over the last GT2. 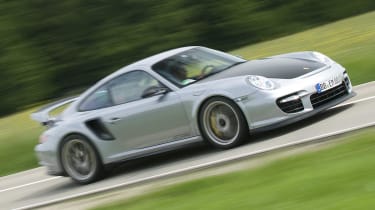 Comedy fast. I jumped out of a new 997 Turbo S into this thing and, at first, wondered what the fuss was all about. Being turbocharged, it doesn’t make much noise and it’s so easy to drive at low speed, rides so well, that you treat it like any normal 911.

The fixed buckets are identical to the GT3 RS’s, the dash is plain 911, there’s far less induction noise than you get in the normally aspirated cars. It’s actually all a little disappointing until you open the taps in third and the car drags the horizon onto your forehead.

There’s no PDK option, just a robust, short-throw manual. The clock would have you believe that a Turbo S is quicker to 62 and as fast to 100mph, but, as ever, the clock lies. This car is different-world fast to the Turbo S. 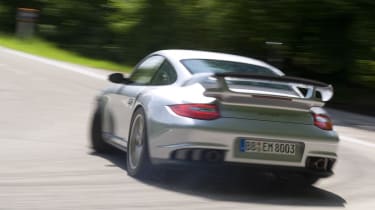 And of course it’s a challenge for the driver. No other turbocharged 911 comes close to offering the chassis balance that this car does. It has monster front–axle grip and it doesn’t set to that initial understeer that used to plague the 996 GT2. You turn, it grips, the motor lunges, the front axle grips more, then the crazy traction takes-over on the exit of turns. The steering is stunning. Drive it fast, use its potential for a few minutes and you have to back-away before the numbers get silly. The traction and stability control calibration is a masterstroke: you can use so much of the performance, so much of the time.

It’s freakishly comfortable too. Occasionally a low speed bump elicits a creak from those rear rose-joints, otherwise it rides no more harshly than a Carrera on sports suspension. In fact it might just be more supple.

I saw 334kmh on the speedo, and it was still pulling like a mentalist. 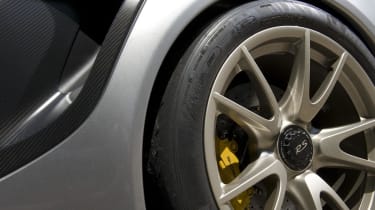 It’s faster, more useable and far cheaper than a 599 GTO. But then it doesn’t feel as special, isn’t lathered in as much carbon and is virtually mute compared to the musical Fandango. Neither the Lamborghini LP670 SV or LP570-4 SL are as quick or as capable. But again they both trounce the GT2 RS for sheer drama.

Those front wings are new for this car. Instead of the GT3 RS’s ugly extensions, they’re one-piece items, albeit an optional one. It’s very expensive and doesn’t sound as good as the GT3 RS, and they should be making 300, not 500. But this is a remarkable car. Veyron aside, it’s the fastest road car I’ve driven – but it’s completely useable and it still involves you in the process. Want. 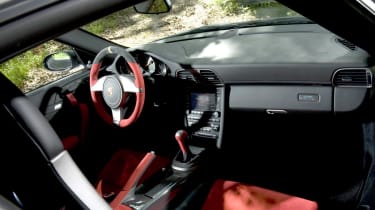