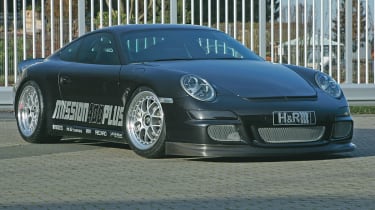 German suspension tuner H&R has teamed up with Jürgen Alzen Motorsport and engine tuner RS Tuning to create the Mission 400 Plus, a 1039bhp Porsche 997 with which the trio hope to take the street-legal world speed record this August. The aim is to exceed 248mph – or 400kph, from where the car’s name is derived.

The Mission 400 Plus isn’t just a 997 with a couple of big turbos bolted on. Its roofline has been lowered by 75mm and all the roof pillars have been canted back by 5.5 degrees to visually compensate for the chop. The windows are all flush-fitting polycarbonate items and the roof dispenses with rain gutters, all in the aid of aerodynamic efficiency. At the rear of the car there’s a pronounced integrated tail spoiler, which the team is hoping will strike the right balance between very high speed stability and sufficiently low drag.

The engine has been increased in capacity from 3.6 to 3.8 litres, and the regular 997 Turbo’s variable-vane turbochargers have been replaced by larger conventional items. All the engine’s internals have been upgraded, and there are also bigger intercoolers and a new exhaust system.

The result is 1039bhp at 7700rpm and 760lb ft at 5800rpm. Impressively, the engine still meets Euro IV emissions regulations.

H&R’s involvement is in setting up the suspension to cope with the unique conditions of the Nardo high-speed track in Italy, which is both banked and bumpy.