900bhp-plus GT9 has Veyron’s record in its sights 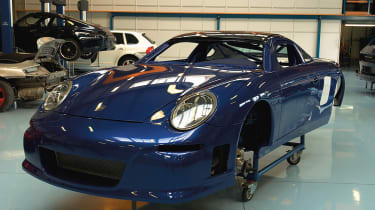 Specialist Porsche tuner 9ff is going after the Bugatti Veyron’s top speed record with this, the GT9, a 900bhp-plus mid-engined supercar loosely based on the 911. The car is currently being assembled at 9ff’s impressive new factory in Dortmund, Germany, in time for the annual Auto Motor und Sport top speed shoot-out at the Nardo test track.

According to Fatthauer, the GT9’s 4.2-litre flat-six will produce 'at least 910, possibly 950bhp’ thanks to the advantageous positioning of its twin turbos afforded by the mid-engined layout.

If the GT9 makes 409kph on the 7.8-mile bowl it will be an impressive achievement – the Bugatti hit its speed on the 5.6-mile straight at VW’s Ehra-Lessien test track.

It’s a measure of 9ff’s growing reputation that it has already sold two GT9s at 400,000 euros plus local taxes.