We catch a 911 prototype track testing 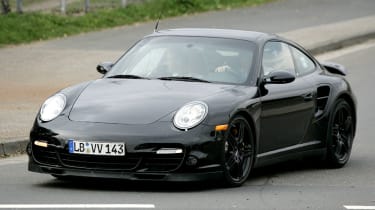 As can be seen in our exclusive shots of an almost undisguised prototype of even the yet-new 911 Turbo, Porsche has almost finished developing the facelift of the current 911-range.

We expect the car to make its official debut at the Detroit Motor Show early next year. While the cabin might get a bit of polish, too, we still believe that power will continue to come from the current 3.6- or 3.8-litre flat-six with an output of 325 and 355 bhp respectively. Exterior modifications will include a new layout for the headlights and totally new taillights as well as a re-designed front bumper on the 'standard' 911s with air-intakes appearing more aggressively, strongly reminding of those of the 911 Turbo. Finally, the rear bumper will be modified, too.