Is the Honda NSX really a cut-price Porsche 918 Spyder? We drive them back-to-back to find out. 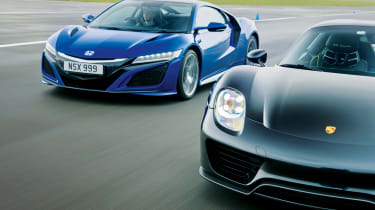 On 22 July 2014, something happened that made my life a little simpler. It ironed out a wrinkle of uncertainty that had always snagged the smooth running of any conversation heading towards a particular, job-related question. The best car I’d ever driven? Not a clue. Over the years I’d lied, hedged, sat on the fence until my bum went numb. I could make a case for a Frankencar amalgam, maybe a two-way split. But never one set of wheels. Then, sometime around 3pm that Tuesday afternoon, a moment of clarity...

For one day only, the Porsche 918 Spyder was the eye of a perfect storm that gathered and raged on the evo Triangle. Weird thing is, it’s a car I’m not sure I ever want to drive again. The memory is too precious, the embedded thrill too potent. Warm air, cloudless sky, a dry and all but deserted Triangle save for a McLaren P1, driven by stunt driver and tester Mauro Carlo, keeping company in the Porsche’s rear-view mirror.

Far from having to scratch for meaningful references, here was almost too much context – not least that provided by the open dihedral door to a Woking-flavoured alternate hypercar reality from which to measure and ponder the reach of the Weissach-spec 918’s abilities. If there was an epiphany to emerge from this collision of competing ‘ultimates’ on the ultimate road over the course of this perfect day, everything was in exquisite alignment.

What transpired was this. The Porsche 918 Spyder smoked the mighty McLaren P1. Not statistically – the lighter, more powerful P1 should have been quicker, yet largely thanks to the Porsche’s four-wheel drive and mammoth, electro-massaged 944lb ft of torque, there was little to choose between them against the clock, and nothing on the road. But experientially... this is what really got to me. Frequently sublime and magnificent as the McLaren was, the Porsche seemed to be composed entirely of superpowers that could be summoned in the snap of a synapse. I’d never driven a car able to transition from sub-7sec 0-60mph zero-emissions silence to sub-6sec 0-100mph V8 violence in a blink, a car that could excite quite so many hairs on the back of my neck or corner so swiftly I could feel the tug of gravity on my cheek. It simply didn’t seem possible that such preternatural performance, grip and dynamics could also be so approachable, transparent and trustworthy.

The 918 Spyder was thus logged in the Vivian memory bank as a unique high, never to be repeated. But then Honda UK managed to get hold of a new NSX, the long overdue, US-flavoured hybrid reboot of the Japanese legend some critics were glibly dubbing ‘a cut- price 918’. Since you could no longer buy a 918 new, or a P1 or a LaFerrari for that matter, and with used examples of the Porsche fetching in the region of £1.3million, the temptation to enrol a bargain-basement successor with trickled-down hybrid hyperness was perhaps understandable, if largely the result of wishful thinking.

Yes, there are a few basic similarities. Both mid-engined cars have four-wheel drive, more electric motors than are strictly necessary to fulfil the hybrid brief, weigh significantly more than their non-hybrid rivals, yet are well versed in the compensatory dark art of advanced torque vectoring – augmented by rear-axle steering in the Porsche’s case. But the petrol part of the Honda package, a purpose- built twin-turbo 3.5-litre V6, is conceptually closer to the P1’s twin-turbo 3.8-litre V8 than the 918’s naturally aspirated, race-derived 4.6-litre aluminium, titanium and steel V8. And, although the NSX has an even broader distribution of electric motive parts, the Porsche’s generate far more energy from a higher capacity battery, allowing it to operate purely and swiftly as an electric car (for up to 20 miles) or make you believe there’s a 10-litre monster under the engine cover when combustion and current are giving it the lot together. 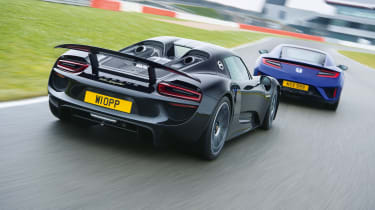 Apart from their torque-vectoring duties – which, admittedly, are many and ingenious – the Honda’s electric motors’ main contribution to forward motion is torque-fill, much in the manner of the McLaren’s. Then there are the starkly one-sided respective power-to-weight ratios: 531bhp per ton for the 918 plays 320bhp per ton for the NSX. Against the clock it’s no contest. In the seven and a half seconds Honda claims the NSX takes to sprint from rest to 100mph, the Porsche is the far side of 125mph, nutting it out with the P1 and La Ferrari. But forget all of that. What I can tell you – indeed, have already told you in last year’s eCoty 2016 – is this: ‘The NSX reminds me vividly and outrageously of the Porsche 918 Spyder.’ Before a wheel turned in anger, Colin Goodwin and I had already discussed the likelihood of the NSX being a ‘junior 918’ and, based on what we already knew and Henry Catchpole’s generally positive thoughts from the launch event, believed it to be a dim and distant possibility at best, but a possibility nonetheless.

It didn’t take long on the first decent stretch of Day One’s route for the sensations and skills I thought I’d revisit only as memories to materialise behind the wheel of the Honda. All right, the sense of occasion was vastly diminished, the soundtrack’s fire subdued and the cabin’s quality fittings non-existent. But the similarities were just as compelling. Over the ensuing days, some notably rapid cars on eCoty didn’t see which way the NSX went. Returning to eCoty HQ one evening on fast and flowing but slightly damp back roads, the NSX simply walked away from the Porsche 911 R. The big difference was that Henry Catchpole in the 911 was nibbling the limit and Dan Prosser in the NSX was wondering where on Earth it might be.

Like the 918, the NSX is able to cover ground at a speed that seems faintly absurd and bears scant relation to the conventional constraints of its power and weight. In fact, the apparent gap between cause and effect is even more pronounced in the Honda, but both cars acquire their advantages in remarkably similar ways. Aided by a seven-speed PDK transmission with speed-of-thought shift times, the 918 driver can deploy instant, crushing low- and mid-range torque, either in a straight line or devastatingly early exiting a bend thanks to all-wheel drive, understeer-quelling torque vectoring, and rear-steer. Although it doesn’t have as much twist or any rear-steer at its disposal, the NSX and its comparably swift-shifting nine-speed auto pull off exactly the same trick, mitigating the potential lag-boost effects of its twin turbos with immediate throttle response, the right gear and the full weight of the electric motors’ precisely vectored torque. Huge instant-access acceleration with massive traction and grip: a killer combination. 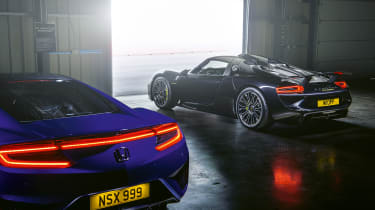 Along with similarly firm but expertly calibrated suspension electronics and damping, it allows both cars to manage their mass brilliantly. They both feel much lighter and more agile than their circa 1700kg kerb weights would suggest. Also helping to dissipate the impression of excessive weight are tremendously powerful braking systems that, despite their regenerative function, also share superb pedal feel.

Let’s not overstate this. The new Honda NSX isn’t a substitute Porsche 918 Spyder. It doesn’t have enough engine, electricity, aural charisma or material quality to pull that one off. Its tech and modus operandi, on the other hand, owe much to the German hypercar and serve it extremely well.

Swapping between the McLaren 570S and the NSX on eCoty felt spookily reminiscent of that sunny day on the evo Triangle in July 2014, when the P1 and 918 went toe-to-toe. And that’s remarkable enough. 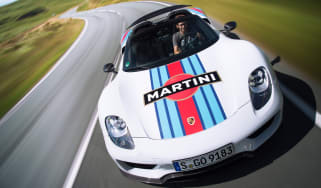 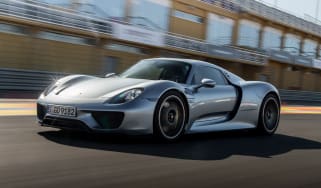