A sales success for 14 years, there are plenty of second-hand Porsche Boxsters to choose from. We tell you how to spot a good one 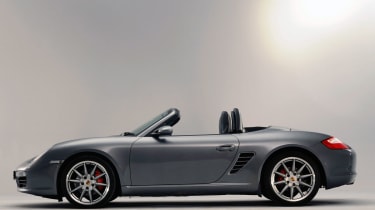 We spoke to James Leaney at Porsche specialist Parr, which has 25 years’ experience of the brand.

One of the key areas to check on any Boxster is around the bell housing. An oil leak here could indicate a crankshaft oil seal failing, but as long as oil isn’t dripping on the floor, replacement can usually wait until the car needs a clutch.

Of more concern would be bearing-type noises from the rear of the engine. According to James, this could indicate a possible failing bearing on the rear of the intermediate shaft, which transfers drive from the crankshaft to the camshafts. ‘The bearing is a “sealed for life” item but engine oil forced in by the cam chains can wash the grease out,’ says James.

Barry Hart at Porsche engine specialist Hartech takes up the story: ‘If the bearing fails then generally the engine will need rebuilding, but if the gearbox is out for a clutch change then the bearing can be checked and, if there is play, we can replace it without removing the engine. We’d recommend buyers walk away from cars with a noisy bearing.’

A problem specific to the 986 variant is cracking coolant expansion tanks, which leak water into the boot. Also, oil separators can fail, which shows up as either a running fault or blue smoke in the exhaust. This shouldn’t be confused with a puff of blue smoke on start-up, though, as this is common with flat engines.

Finally, check the coolant radiators and air-conditioning condensers at the front of the car. ‘Leaves can get stuck in the ducts and as they mulch down they rot the radiators,’ says James.

Generally, the various transmissions are very reliable. However, the six-speed gearbox can pop out of second gear. The solution is a strip-down and rebuild, using a modified detent.

‘The Boxster isn’t particularly heavy on brakes but they can corrode if the car isn’t used,’ says James. ‘Owners should drive the car after it has been washed to dry them off.’

The Boxster also suffers from suspension bush wear. ‘Bottom-arm bushes last around 30,000-40,000 miles,’ says James. ‘They then start to delaminate and begin creaking. Replacements are £200 each. Also, the rose joints on the trailing arms, where they meet the body, can wear and knock. These are £135 for the fronts and £200 for the rears.’

There are no real corrosion issues, but James recommends checking the roof operation: ‘Make sure there are no creaks as the roof goes down and up, possibly indicating a dry joint in the mechanism. Also, check behind the seats for water. If the drain holes under the roof get blocked, water can get in here.’

The 987 interior is harder wearing than the earlier versions, but check all the electrics work properly, as the Boxster was one of the first cars to use CANBUS technology – individual electrical systems controlled by coded signals sharing common wiring.

Prices supplied by Parr, Sussex. Prices include VAT at 17.5% but not fitting)

Early Boxsters can be had for as little as £7000, but for this money you’ll be looking at something with minicab mileage. Younger and fresher examples can be had easily for around £13,000, while late 986s are available for around £15,000. The price jumps to around £20,000 for an early 987 and closer to £30,000 for the last of the first-generation 987s (late 2008). The price gap between the base model and the S expands the newer the car is, but is rarely enough to put you off the more powerful version.

*All prices correct as of October 2011