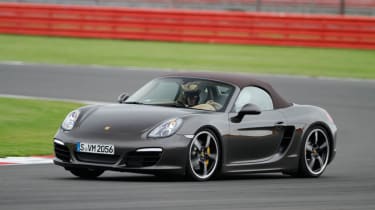 An optional sports chassis for the new Porsche Boxster S, which both lowers and firms it up compared to the standard car. We drove a prototype version, both on track at Silverstone and on the local roads, but we’re assured that the same system will be offered on the Boxster S later this year, adding around £1000 to the price of the standard car.

The sport Suspension kit lowers the Boxster by 20mm compared to the standard Boxster S, and by 10mm over one fitted with the optional PASM system. Spring rates are 20 percent firmer at the front and 25 percent firmer at the rear. Anti-roll bars have also been beefed up, being 22 percent stiffer than standard at the front and a whopping 46 percent stiffer at the rear.

Unusually, Porsche has opted to use passive dampers for the Sport kit rather than use the switchable PASM active shockers.

If you’re in the slightly unlikely position of looking for a Boxster S for regular track-work then the Sport suspension kit is definitely worth considering. It sharpens up the standard Boxster S’ already sharp driving experience to an impressive degree. On track it feels noticeably harder-edged than a PASM-equipped Boxster S, with less roll, a more responsive front end and a near-total absence of understeer. A classic case of small revisions having a major impact on the way the car drives: dynamically it feels far closer to a Cayman R than a standard Boxster.

On the road it’s equally hardcore – perhaps a bit too much so – with the same lightning responses but the firmed-up chassis picking up the sort of road imperfections that a PASM-fitted Boxster S would float over.

If you’re looking for the grippiest and most responsive Boxster then this is it, but for most the standard car will be more than dynamic enough.

The Sport suspension upgrade will cost about the same as PASM active dampers (currently a £971 option), and won’t prevent buyers from choosing other ‘dynamic’ options including power steering plus and Porsche’s torque vectoring system.