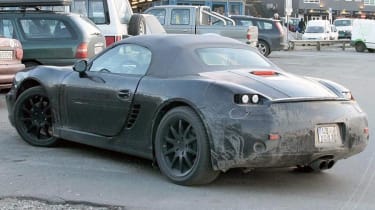 Not content with the fresh introduction of the revamped Boxster and Cayman, Porsche is out testing the third-generation of the benchmark roadster.

Our spies caught the all-new car out testing. At the front it wears a similar face, Porsche dressing it up in a similar manner to the current car to fool onlookers. However, more dramatic changes can be seen at the rear with a more chunky looking back end and some simple LEDs hiding a bigger change to the taillights.

The interior is also vastly different, boasting more luxurious influences from the Panamera saloon. The elongated air vents and multi-button interface hint at a plusher cabin than the one in the recently launched Boxster, which evo’s driven in Issue 128, out on February 4.

The new car is likely to concentrate on losing weight, especially key if the interior is to gain some, while there’s talk of a VW-sourced four-cylinder turbo for the first time. Whether that makes an appearance on the Boxster or is held back for a Porsche-badged version of the VW Bluesport remains to be seen. Otherwise, engines are likely to remain unchanged from the newly launched direct injection units in the new Boxster, with a 255bhp 2.9 in the base car and 310bhp 3.4 in the Boxster S.

A six-speed manual or Porsche’s PDK dual-clutch semi-auto will be the transmissions offered, although fingers crossed the latter will have more intuitive paddle shifters. Expect the Mk3 Boxster to appear in late 2011/early 2012.