With 414bhp from its 4.8-litre naturally-aspirated V8 engine, this latest-generation GTS is the hard-edged big brother to the Cayenne S, and is making its debut at the Beijing motor show 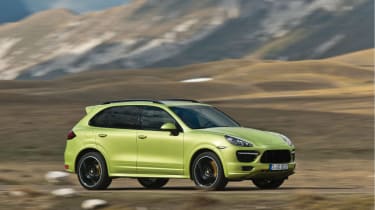 Porsche has released first details of the new Cayenne GTS, which is to make its world premier at the Beijing motor show on 23 April. Fitted with a tuned version of the naturally-aspirated 4.8-litre V8 from the 'S' - producing 414bhp - this model is a lower, tauter and more focussed Cayenne, positioned below the Turbo with the keen driver in mind.

With a 0-62mph time of 5.7 seconds the GTS is not quite up there with the Turbo, but is quicker than the standard Cayenne S, and will go on to hit a maximum speed of 162mph. An eight-speed Tiptronic S gearbox is fitted, along with an auto start/stop function, which helps to keep CO2 emissions and fuel consumption down to a claimed 26.4mpg.

The sporty SUV is to make its debut at the Beijing Motor Show on 23 April, but Porsche has announced that the GTS will go on sale in the UK and Europe during July 2012, priced from £67,147.