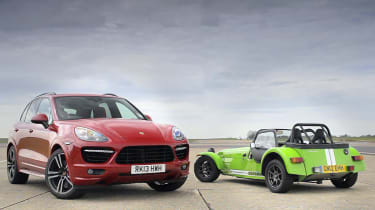 It’s David versus Goliath in our latest video track battle, as the dinky little Caterham Seven Supersport takes on the behemoth Porsche Cayenne Turbo S around the Bedford Autodrome.

All isn’t as ludicrously silly as it might seem. While the Cayenne’s 2215kg kerb weight equates to more than four 520kg Sevens, it has nearly four times as much power (543bhp vs 140bhp). As a result, the Porsche’s 249bhp/ton power-to-weight ratio is in the same ballpark as the 273bhp/ton Caterham’s. So while the Turbo S’s 175mph top speed is a stonking 55mph higher than the 120mph Supersport’s, their 0-62 times are nearly identical, the 4.5sec SUV just pipping it.

Still, those raw numbers only tell half the story. As Richard Meaden finds out in the video above, physics and how they affects a car’s agility and balance are also key to a good lap time. Cue some of the most ridiculous cornering shots you’ll have ever seen…