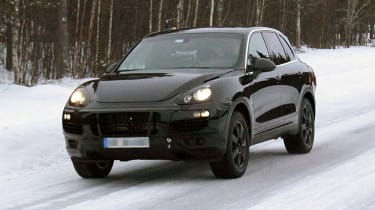 Despite earlier reports, the prototype snapped in these pictures is not a smaller brother to the current Porsche Cayenne – various media reported it could be named the Roxster – but is actually the first sight of the icon itself: the new Porsche Cayenne.

Porsche was first to the market with an SUV model based on the vehicle architecture developed jointly between Volkswagen, Audi and itself. The original Cayenne was released back in 2002, one year ahead of the VW Touareg and four years ahead of the Audi Q7. The sports car brand has apparently succeeded to pushing VW to speed up development of projects that are shared in common, namely, the replacement design for the SUV family.

Executives at Porsche hope to launch the new Cayenne by the first half of 2010, however, the second-gen Touareg isn’t due to make an appearance until late 2010 at the earliest.