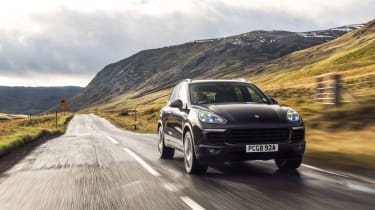 And it isn’t a case simply of monstering bends into submission with a generous acreage of planted rubber. There’s real involvement and finesse, too, with good weight and feel from the hydraulically power assisted steering and a surprising degree of adjustability on the exit of corners, especially if you turn the stability and traction electronics off.

The GTS gets PASM adaptive dampers as standard. Air suspension is available as an option, which lowers the car by 20mm. Go with the steel springs and the GTS sits 24mm closer to the ground than a regular Cayenne S and, not surprisingly, ride comfort does suffer to a degree. But that sacrifice in ride quality is compensated by an even greater involvement, and the GTS is truly entertaining to drive. 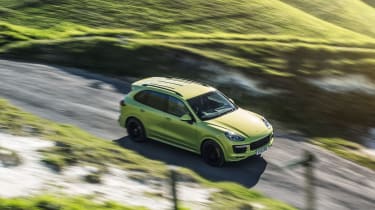 The Turbo and Turbo S have such an abundance of performance, you can really exploit the chassis’ abilities. In fact, all but the diesel models have the grunt to actually have the Cayenne squirming on the exit of a bend and needing a touch of corrective lock to keep you pointing in the right direction.

The diesel models, with their narrow powerband, don’t allow you to indulge in the Cayenne’s talents quite so frequently. Yet, they still turn-in and flow down a road with the competence of a much smaller and lighter car, just like the rest of the range.

The Cayenne’s structure is starting to feel old now, even with its dampers set to its softest mode pot holes and ruts send shudders through the body and there’s a definite sense the suspension is working very hard over rough roads. It certainly doesn’t ruin your enjoyment of the Cayenne, but it just isn’t the supreme solidity you’d expect of a modern Porsche.

If you really intend to go off road then the adaptive air suspension as it allows you to raise the ride height for traversing rougher sections. Hill descent control and active four-wheel drive allow the Cayenne to tackle most harsh terrain without breaking sweat.