They're almost matched on power-to-weight, but which is your money on? Porsche v Caterham drag race video here 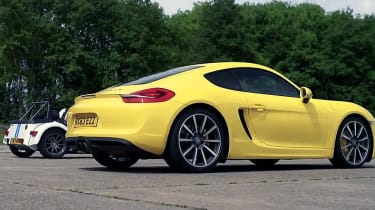 At first glance the Porsche Cayman S and Caterham Seven Roadsport 140 might not look like they’ve got much in common, but in fact this pair of two-seat performance cars both offer similarly high levels of driving pleasure.

Whilst the Seven does away with a roof, proper doors and most things in the way of luxury, the Cayman offers typically Porsche levels of comfort and sleek design. It’s for this reason the Caterham and Porsche both have such closely matched power to weight ratios – just 9bhp separates them – making this drag battle very compelling indeed.

The lightweight Seven only has 140bhp to stir up from its 2-litre four-cylinder engine, but with just 550kg to push forward, it has a power-to-weight ratio of 255bhp/ton. Despite the Cayman possessing over twice as much power (321bhp) from its 3.4-litre flat-six engine, its 1320kg weight pegs its power-to-weight figure at 246bhp/ton.

Whilst the Caterham has the race won on paper, the Porsche does have a few tricks up its sleeve that could bring it back into contention. Its mid-mounted engine enables the German sports car to harness fantastic levels of traction, so much so that over 5000rpm is required on launch to avoid it bogging down. The Caterham on the other hand needs a heavy foot to enable a quick launch, spinning its wheels all the way through first gear.

Though the Porsche Cayman S costs almost double the price of this £24,495 Caterham Seven at £48,783 – as an all-rounder that can beat Lotus Evora S and Audi TT RS both on and off track, it’s still surely ne of the best value sports cars money can buy. And the Caterham? Its classic design has worked for decades, so why should a modern Porsche stand a chance now?

To find out which wins our latest Drag Battle, watch the video above…