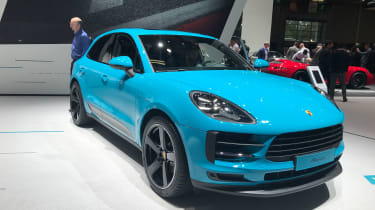 A new updated Porsche Macan is appearing at the 2018 Paris motor show after making its debut earlier this year. Along with a slight redesign to freshen up its exterior, Porsche’s small SUV has a new, more efficient turbocharged four-cylinder engine for the entry-level version. The updated car is ready to order immediately and costs from £46,344.

The updates to the standard turbocharged 2-litre petrol motor haven’t been to improve power, instead, because of new emissions regulations, the engine has to be fitted with a particulate filter and that has reduced power from 249bhp to 242bhp. However, torque from the new engine remains the same as before at 273lb ft.

Despite the 7bhp drop in power, the new Macan is faster to 62mph, beating the old basic Macan’s 6.9sec time by 0.2sec. The car’s top speed has been affected by the engine change too; it now reaches 139mph – 4mph slower than before. Porsche has dropped the V6 diesel engine that made up a majority of UK sales, the 351bhp turbocharged 3-litre V6 Macan S maintains its place in the middle of the engine range. At the top is the Turbo, picking up the new 2.9-litre twin-turbocharged V6 engine, borrowed from the larger Cayenne S and Audi RS4 no less, with 434bhp. 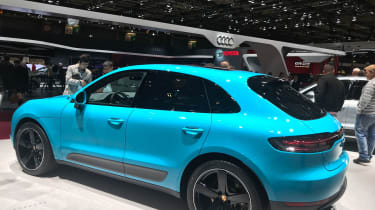 Porsche has also tweaked the Macan’s chassis and, just like before, its on-road manners have been the main focus. Like its big brother, the Cayenne, the Macan is fitted with wider wheels and tyres at the rear than at the front, while the standard wheels on the basic Macan are 18-inches in diameter – up to 21-inch items will be available on the options list.

The biggest change to the exterior is a new LED strip that spans the rear of the Macan. It’s a similar design cue to that found on the Cayenne, Panamera and what we’ve seen on back-end of the next-generation Porsche 911 prototypes. The headlights have also been updated for the new Macan with LED lights being standard, Porsche’s adaptive lights (Porsche Dynamic Light System Plus) are still optional. 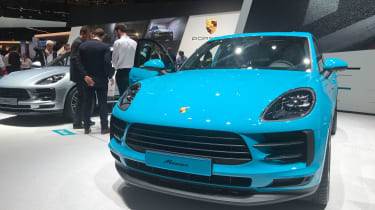 If the design changes are a little too subtle, but you’re very familiar with Porsche’s paint colours, the four new hues the Macan is now available in will help you identify the facelifted models. You can get the new small SUV in Mamba Green, Dolomite Silver, Miami Blue and Crayon.

Inside the changes aren’t dramatic either, there’s a bigger central screen – now 10.9-inches up from 7.2 and you can choose the smaller diameter GT sports steering wheel as an option.

These are small, almost insignificant changes perhaps, but Porsche’s compact SUV has long been one of the best handling 4x4s you can buy. The basic four-cylinder might not have been the most exhilarating but there were traces of Porsche DNA throughout, and we expect its replacement, not to mention the revised Macan as a whole, to be the same.