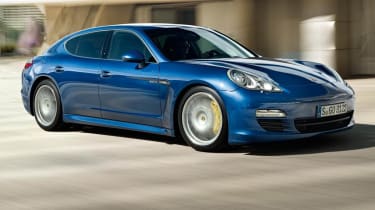 Porsche has revealed its new Panamera S Hybrid. It’s the sixth version of its sports saloon, which despite attracting some scepticism upon launch, has proved a huge success: after less than a year and a half on sale, 30,000 have found homes worldwide, over 1000 of those being in the UK. And this more environmentally-minded iteration should only serve to fuel those sales figures. The hybrid version of the Porsche Cayenne accounts for one fifth of the SUV’s registrations. The rear-drive Panamera S Hybrid gets the same powertrain. It comprises a 329bhp 3.0-litre supercharged V6 petrol engine and a 46bhp electric motor, the latter hooked up to a nickel metal hydride battery, which is topped up by energy recuperated during braking and driving. 0-62mph takes 6.0sec, while the top speed is 168mph. Both elements can power the car individually, or in tandem. The electric motor operates as a generator and a starter, and can solely power the car on its own up to 53mph for very short distances, before the combustion engine kicks in. At cruising speeds up to 103mph, the V6 engine can automatically switch off when not required and put the car into a coasting-like ‘sailing mode’, which you can see in action in the Cayenne in our video here. Like the rest of the Panamera range, the Hybrid gets lashings of equipment (sat-nav, cruise control, Porsche Active Suspension Management et al) but most impressive of all, it boasts some startling sensible figures: 41.5mpg combined and 159g/km of CO2 emissions. That’s less than a lot of family hatchbacks and being sub-160g/km, boosts the Panamera's company car credentials by putting the S Hybrid under the Company Write Down Allowance threshold. Private customers will pay £155 annual road tax, compared to a Porsche Panamera Turbo’s £435 (£950 for the first year). The Porsche Panamera S Hybrid gets its public unveiling at the 2011 Geneva motor show in March, and goes on sale in the UK in June 2011, priced from £86,146, over £25,000 more than a similar Cayenne. Porsche Panamera v Bentley v Maserati v Aston Martin Review of the Porsche Cayenne S Hybrid SUV