We put Porsche's new electric SUV under the spotlight. Good enough to rank as a proper Porsche? 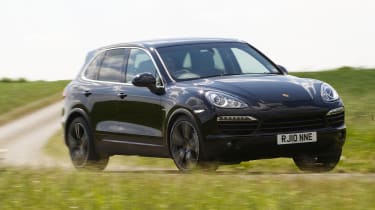 Exactly as the name suggests, this is the electrically assisted version of Porsche’s newly revamped Cayenne SUV. It’s a standard hybrid system, in that the battery is charged under braking, then delivers power to all four wheels via an electric motor positioned between the 3.0-litre supercharged V6 and eight-speed automatic gearbox. It costs £57,609.

It’s got to be the touchscreen satellite navigat... Only kidding – of course it’s the power unit, which combines the Audi S4’s engine with a 47bhp (and 221lb ft) electric motor. An 80kg battery pack made up of 240 cells is mounted under the boot floor and it is theoretically possible to drive solely on electric power up to 37mph.

If you don’t look to closely at the attractive new switches in the Cayenne’s Panamera-inspired interior, you’d never know you were driving a hybrid – which on one level is surely the aim. So the 2240kg Cayenne drives much like any other, with faintly other-worldly cornering ability for a car of its height and weight. Despite this car featuring 21-inch wheels (a £3372 option) ride comfort has improved on the latest model, which is now markedly less jerky.

One thing to be aware of is what Porsche terms ‘Sailing’. When you lift off the throttle, a clutch disengages the engine from drivetrain, but leaves the electric motor enagaged, so speed drops only very slowly. It’s a neat trick, unnerving at first and requires anticipation in your driving but there is a certain satisfaction to be gained from watching the screen graph telling you what percentage of your time is spent at zero emissions. Not a Porsche attribute we’re familiar with.

Putting the car in Sport mode stops this happening, giving you ‘proper’ engine braking and a greater sense of control over the car.

Well, it’s a damn sight better than a Lexus RX400h for a start, but ‘Sailing’ the technology isn’t really any more advanced. That’s unlikely to dissuade Porsche from doing this again, so expect a hybrid Panamera in due course, and let’s not pretend the sports car will be off limits either.

The Cayenne Hybrid is the cleanest car in Porsche’s model line-up, putting out 193g/km of CO2 and achieving 34.5mpg. However, I’ve just spent four days with it and the best I got was 27.6mpg, with an average of 24.4mpg. The Boxster and Cayman are way more efficient than that, so to the latest 911 and I reckon you’d have to drive the diesel Cayenne pretty hard to get it down to that level. On that subject, which is more of a Porsche the hybrid or the diesel? Your thoughts, please.