Lighter and even more agile, is the entry-level V6 Panamera the best driver's car in the range? 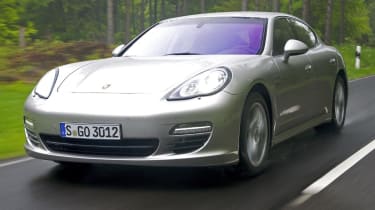 A Panamera for a more youthful clientele, trumpets Porsche (the average age of V8-engined Panameras is 53) but, the truth is, the V6 is the one most people will want or, at the very least, common sense dictates they’ll have to settle for. From now on, half the Panameras rolling out of Zuffenhausen will be powered by the 300bhp, 3.6-litre V6 and, in the UK, it will account for a third of Panamera sales when deliveries begin in June. Porsche has endeavoured to make the ground floor model as tempting as possible, electing to lop a brace of cylinders from the V8 rather than use the V6 from the Cayenne which is a Volkswagen engine and, in any case, doesn’t fit. Prices start at £61,461.

Well, the engine, obviously. Not just because it hits that psychologically important 300bhp (most rival powerplants fall between 30 and 60bhp short) but also because it weighs 30 kilos less than the V8 and sits further back in the chassis, giving a more favourable centre of gravity and a slightly more even 52:48 front/rear weight distribution. As a result, it should be the best-riding Panamera of all. As with the V8-engined models, the V6 is available with rear- or four-wheel drive, the latter getting Porsche’s 7-speed PDK transmission as standard (together with a £66,929 asking price) while on the rear-driver it’s an option.

A curious mixture. Lacking the sledgehammer punch of the turbo V8 - the V6 is brisk, smooth, refined and works well with PDK, but acceleration is far from brutal – attention is redirected to the chassis which is a frustrating partnership of excellent and awful. Grip and body control are truly exceptional and the way the Panamera can snap through a series of S bends with hardly any body roll is something no rival can emulate. That said, the Servotronic steering, which weights up progressively with speed, is almost completely devoid of feel and, combined with the car’s size and bulk (the sense of which never dimishes), saps confidence on roads that should be fun. The ride’s pretty good, too, but the suspension kinematics are ridiculously sensitive to white lines and certain camber irregularities, causing the rear end to squirm and jink disconcertingly. Thinking this might be down to the 20-inch wheels and wide tyres, we tried a Panamera 4 on 19s and, while better, the traits were still present and, frankly, unacceptable on this type of car.

In one sense, very well. As a V6, the Panamera has no real rivals. And if the idea of a big Porsche with a small, relatively economical engine ticks enough of the right boxes (as its maker is confident it will) then little will stand in its way. Looked at another way, the V6 is on a hiding to nothing. For the same money you can buy a Jaguar XFR or BMW M5, either of which will give vastly greater rewards from behind the wheel.

The best thing about the Panamera remains its glorious cabin. Unlike the Aston Rapide, it’s a proper, spacious four-seater and travelling in the back is a particularly satisfying experience. Your inner racing driver may not thank you for buying the V6, but your passengers won’t care.