A facelift, changes under the skin too, but the same bonkers and brilliant result 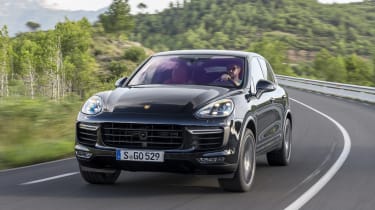 It’s arguable if the Porsche Cayenne needed another facelift. A vehicle that has stubbornly resisted Porsche’s attempts to nail a truly comfortable-in-its-own-skin look since its introduction 12 years ago, the latest design tweaks are more about differentiation, aero and cooling than a final stylistic resolution - the next Cayenne will start with a cleaner sheet - but, as ever, it’s an impressive and imposing beast that’s both slightly neater and more male gender-adjusted than before.

Despite some shared elements, it doesn’t look half as good as its smaller brother, the Macan, but that’s unlikely to dent its standing as Porsche’s most lucrative product or, indeed, its reputation as the wonder of the SUV world.

Porsche’s conviction that it should remain so is reflected in the meat of the update under the mildly remodelled skin shared by what is now a seven model range that includes the first premium SUV to be available as a plug-in hybrid, a brace of diesels and the addition to the petrol engine line-up of a twin-turbo 3.6-litre V6 from the sportiest Macan producing 410bhp and 435 lb ft of torque. The latest changes focus chiefly on making the Cayenne more efficient. Collateral benefits in performance, in turn, warranted chassis tweaks to make the hulking 4x4 even more bewilderingly agile on a twisty country road. The new layers of standard kit, tech and connectivity are something of a given these days.

As a result of software modifications and the fitment of new four-piece bushes front and rear, the Cayenne’s air suspension, which can handily be raised and lowered, has been given a wider remit: to deliver more precision and control when fully exercised on road and a more comfortable ride at low speeds.

Inside, there’s a new multi-function steering wheel modelled on that of the 918 Spyder and the rear seats have been redesigned to be more comfortable and offer a better view forwards for those in the back. The vault-like solidity of the cabin and the fit and quality of the materials are more impressive than ever but a stark contrast to the overtly plush and luxurious ambience of a Range Rover Sport.

Being evo, it’s the range-topping 4.8-litre V8 Turbo that commanded the most wheel time at the new car’s launch in Spain. More powerful but less thirsty than the outgoing model, its stats alone are seductive: 513bhp and 533 lb ft of torque, 0-62mph in 4.5sec and 173mph flat out. All this with a combined consumption of 25.2mpg which equates to 261g/km of CO2. At 2185kg, the Turbo is marginally lighter than before, but for something still weighing north of two tonnes, the claims almost defy reason.

Initial impressions are visited by comparable sense of unreality. With the superbly smooth and fast 8-speed auto transmission in Drive, the way the Cayenne Turbo acquires speed on the lightest of throttle openings is vaguely unsettling. Effortless doesn’t really do the feeling justice.

But it’s what happens when you find a suitably open stretch of tarmac and bury your right foot that astounds because you discover that, far from being a low- and mid-range turbo-gorged heft-fest, the fastest Cayenne’s inner hot rod actually resides in the upper half of its rev band. And that’s seriously addictive. Quickly you find yourself switching to steering wheel paddles, immersing yourself in the V8 soundtrack and arriving at bends travelling far faster than you imagine even a Cayenne with the latest chassis mods could handle. But you’d be wrong.

This latest Cayenne Turbo corners securely and neutrally at speeds that seem patently ridiculous. And it isn’t a case simply of monstering bends into submission with all-drive grip and traction supported by a generous acreage of planted rubber. There’s real involvement and finesse, too, with good weight and feel from the hydraulically power assisted steering and a surprising degree of adjustability, especially if you turn the stability and traction electronics off. In short, it’s something of a point-to-point weapon.

That it’s also a more mature and polished Cayenne Turbo can only be good news for those who need what must, for now, be the ultimate all-rounder.