Overly firm ride aside, the new GTS continues the Cayenne’s reign as the best large SUV for drivers 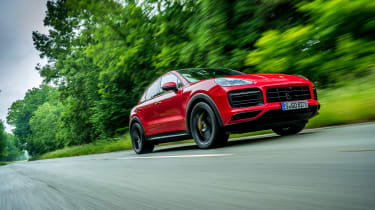 Porsche’s GTS models have, in recent times, been among the most appealing in their respective ranges. We can’t wait for a 992 GTS to arrive for instance, given how great both the 997 and 991 GTS were, and the Macan GTS was comfortably the pick of Porsche’s compact SUVs.

Now the Cayenne GTS has returned, in both regular-bodied and coupe-roofed variants. A V8 engine is back, having been replaced by a twin-turbo V6 between 2015 and 2018, and its chassis is the most sophisticated and most focused yet, while in Coupe form it’s about as sleek as a Cayenne can get. So where does it rank as a driver’s car? 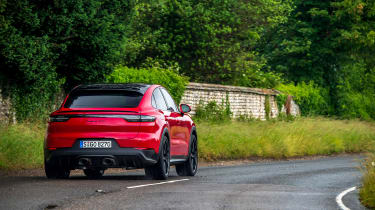 The latest Cayenne GTS uses a development of the V8 engine from the Turbo, albeit with a reduced power output that avoids the GTS stepping on its bigger brother’s toes. The four-litre, twin-turbocharged unit produces 453bhp at 6000-6500rpm and 457lb ft of torque from 1800 to 4500rpm, with a hot-V arrangement for the turbos to improve response.

The eight-speed Tiptronic automatic is familiar from other Cayennes, but the GTS does get a unique exhaust system, whose design focuses more on in-cabin sound than on other Cayenne models, Turbo included. Something to enjoy while the GTS sprints to 62mph in 4.5sec (not bad considering a 2175kg kerb weight), while Porsche quotes a top speed of 168mph. 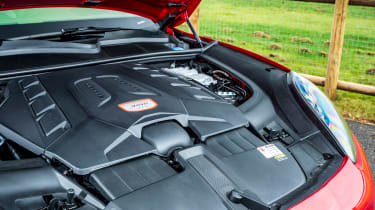 GTS models feature several visual changes but also pack tweaks under the skin to justify their more dynamic billing. Externally they’re defined by 21-inch RS Spyder-design alloy wheels, dark-tinted headlights and tail lights, and a black finish to the air intakes, window trims, exhaust outlets and Porsche badging. Inside there’s an uptick in the use of Alcantara and dark brushed aluminium trim, and sports seats.

A Lightweight Sports Package is also available, and fitted to our test car. This includes an upgrade to 22-inch wheels, as well as a central-exit exhaust system tuned for even more in-cabin sound, a retro houndstooth cloth for the sports seats, an Alcantara-trimmed steering wheel, and a carbonfibre roof panel.

Mechanical changes for the GTS include a 20mm-lower ride height (on steel springs with standard Porsche Active Suspension Management, or PASM, with adaptive air suspension an option, as fitted to this car), as well as Porsche Torque Vectoring Plus, while similar to other Cayennes you can optionally specify rear-wheel steering and ceramic brakes, both fitted here. 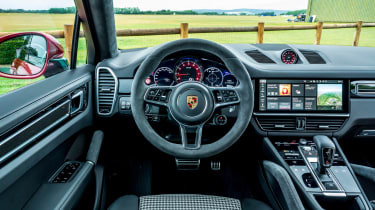 Listen to the almost unavoidable rhythmic thump of catseyes under the Cayenne’s offside tyres and you’ll understand that a British B-road isn’t the environment for which it was created. It’s not completely undone by roads narrower and bumpier than might be ideal, though nor is it without flaws beyond its sheer size.

Chief among these is a ride quality that’s just on the wrong side of firm for a car of this type, even in the softest PASM setting on the adaptive air suspension. Coarse road surfaces send a surprising amount of noise through the cabin, but traverse any kind of broken or uneven surface and the GTS rides with an abruptness and constant movement we’ve not really experienced before in a Cayenne. 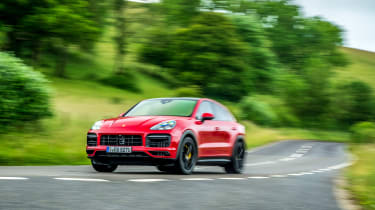 The 22-inch wheels of the Lightweight Sports Package fitted here seem a likely culprit on this car, their sheer size and low-profile tyres seemingly giving the suspension too much to deal with. It’s difficult to foresee a time when you’d wish to use either of the firmer damper settings on UK roads as a result. The GTS becomes quite busy indeed in either of them, and can even skip slightly over irregularities mid-corner.

There’s no doubt the set-up has benefits on smoother surfaces, with positive turn-in (and well-weighted, accurate steering) backed up by strong grip and, as we’ve discovered before with the current Cayenne, plenty of help from the steered rear axle. You can really lean on it and, bumps aside, there’s not a lot that will deflect it from the line you’ve picked. Nor will much trouble it under braking. 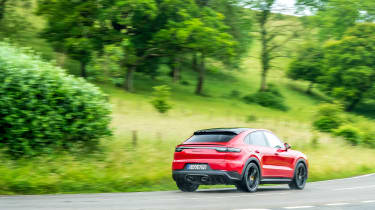 The engine is a star too. Petrol particulate filters have sucked some of the character out of recent petrol engines, but the central-exit exhaust system has a cultured and mellifluous tone that adds just a dash of excitement to every full-throttle sprint and a satisfying backbeat to general rumbling around. The performance actually feels well-judged too – enough to match hot hatchbacks, but not quite as brutal as the Turbo with its 3.7sec 0-62mph time – while the gearbox is smooth when you need it and snappy when you want it.

Otherwise, it’s still the same Cayenne we know and admire. It’s one of few SUVs that arguably looks better in Coupe form than as the standard wagon, the 22-inch wheels that do little for the ride at least look fantastic, and the lightweight package seats are great too, both comfortable and supportive. 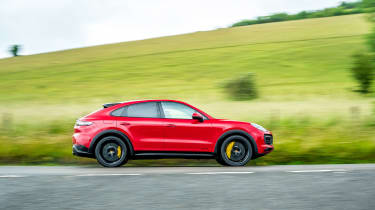 The Cayenne GTS Coupe tested here starts at £88,750, while this particular car packed a range of options that lifted the overall tally to £123,451. Chief among these are the aforementioned Lightweight Sports Package which comes to £6692 and PCCB ceramic brakes at £6321, but items such as PDCC (£2315), rear-wheel steering (£1448) and adaptive air suspension (£1511) all contribute.

There are rivals among these with more character, more performance, more surprise and delight features and more exclusivity, but the Cayenne’s mix of talents remains compelling if you’re in the market for such a car. Ride quality aside, the GTS is still one of the best.