Two-ton ‘coupe’ SUVs are difficult to like, but there’s little faulting the Cayenne Coupe’s performance or dynamics 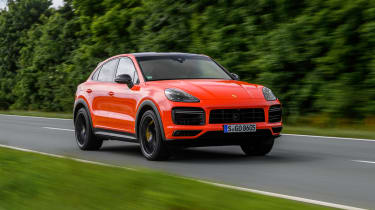 It was bound to happen eventually; just as Porsche expanded its Panamera line-up with an elegant wagon variant, the company has gone the other way with the Cayenne and now offers a ‘coupe’ alongside the more practical, conventional Cayenne.

In principle, it’s a tough car to like. Most SUVs already feel out of step with the sensibilities of modern motoring, and ones that sacrifice the genre’s core value of utility at the altar of brash aesthetics can feel outright obnoxious.

But Porsche is at least a sports car brand, so has a little more wiggle room in this regard – and as is often repeated, strong sales in the SUV category fund more GT3s and 918 Spyders. If ever there were a reason to let an SUV coupe slide, just this once...

Three engines power the three new Cayenne Coupes. The base Cayenne Coupe gets a 3-litre turbocharged petrol V6, the Cayenne S Coupe a 2.9-litre twin-turbo petrol V6, and the Cayenne Turbo Coupe a 4-litre twin-turbocharged V8. All are equipped with petrol particulate filters to meet WLTP emissions regulations, and all come attached to an eight-speed Tiptronic automatic transmission, sending power to a clutch-type all-wheel-drive system.

> Click here for our review of the Porsche Panamera 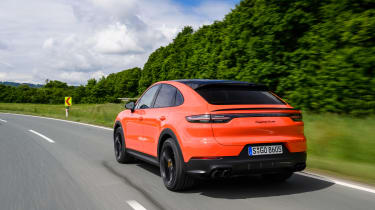 The Cayenne Coupe’s bodywork is surprisingly different from that of the Cayenne, and not just in the obvious tailgate area. The front windscreen and A-pillars are also at a more reclined angle, with the roofline lowered by 20mm, and the rear doors and wings are 18mm wider than on the Cayenne. To preserve rear headroom under the sweeping tailgate, the rear seats – a pair of integrated buckets are standard, with a three-seat bench optional – are mounted 30mm lower.

A panoramic glass roof also differentiates the Coupe from its regular sibling. Unless, that is, you specify the lightweight sports package, which among other features, uses a carbonfibre roof panel that sheds 22kg from the highest point of the car. Not a great saving on a car that weighs in at over two metric tons, but every little helps, as the advert goes. 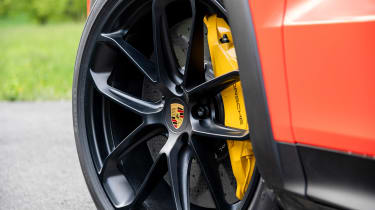 Back to back with a regular Cayenne, on a circuit, and with particularly fine-tuned senses, you might notice a difference in the way the Cayenne Coupe drives. Suffice to say that on regular roads at more conventional speeds and driven in isolation, the Cayenne Coupe is broadly identical to the Cayenne.

Which is no bad thing, of course. Where some performance SUVs feel like they bludgeon their way down a road, all grip and power and little finesse, the Cayenne is more adjustable and fluid. Indeed, more like any other Porsche. That in itself is an impressive achievement.

> Click here for our review of the Porsche Cayenne

The Cayenne Coupe’s steering – precise, perfectly weighted, predictable in response – remains a highlight, backed up by Porsche’s torque vectoring and rear-wheel-steering systems. They give the Cayenne Coupe the kind of agility that cars like this simply shouldn’t be capable of, and a counter-intuitive but wonderfully naughty sensation that turning harder and using more throttle actually seems to tighten your cornering line rather than forcing the nose to run out wide. 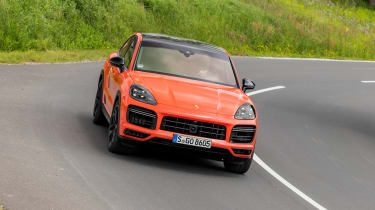 It must be said that the Turbo delivers the greatest thrills – its rush of straight-line speed is at odds with the car’s size and weight – with a soundtrack that’d fit right in at La Sarthe. The V8’s roar is particularly apparent with the lightweight sports package, which strips out sound deadening, uses that carbon roof, and equips forged 22-inch wheels and houndstooth-patterned sports seats. You can’t feel the weight savings, but you can hear it – there’s a touch more cabin and wind noise, which along with the grippy cloth seats improves the sense of involvement.

At the other end of the scale, the basic turbocharged V6 Cayenne already feels as quick as you’d probably want to travel in an SUV, and once past a slightly diesel-like grumble at low revs, you get a tuneful note to go along with the strong, linear performance. The Cayenne S Coupe adds another few percentage points of intensity over the base car, but trails the Turbo’s walloping performance. 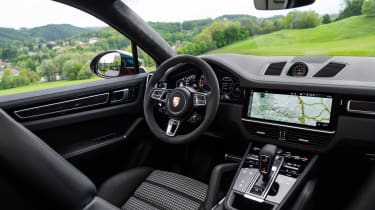 All three cars feel at their best in Sport+ mode, which ramps up damper firmness to improve the already impressive body control, and enhances throttle response. Ride quality seems largely unaffected, with the caveat that the Austrian launch roads were particularly smooth. The car’s weight ultimately limits agility, but this is still about as good as SUVs get.

Gearshifts are well-judged in auto mode and swift (if not quite instant) in manual, and the brakes, always a Porsche strongpoint, are powerful and have good pedal feel – though given the car’s weight you have to squeeze them relatively hard.

Love or loathe the styling and what it stands for, the Porsche Cayenne remains a driver’s car in coupe form, not just in context of other SUVs, but vehicles in general. We’d be perfectly happy with the basic Cayenne Coupe, but it’s hard not to imagine buyers taking the more dramatic styling to heart and going the whole hog with the Turbo. 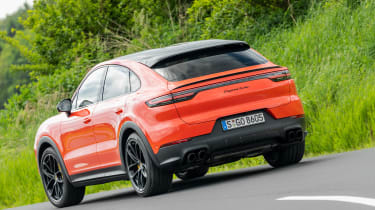 Opt for the Lightweight Sports Package and you add £7482 to that figure on a Turbo, or as much as £9342 on the basic Coupe. Features like Porsche Dynamic Chassis Control (£2315) or rear-axle steering (£1448) are also optional, and while the Turbo gets the Porsche Surface Coated Brake package as standard (it’s optional on the others) full PCCB carbon-ceramics are an option on all models, at a minimum of £4217 on the Turbo and a maximum of £6321 on the regular Coupe.

The Coupe’s rivals are the BMW X6s and Mercedes-Benz GLE Coupes of the world, particularly in their high-performance X6M and GLE63 forms. The latter are closest in concept to the Cayenne Turbo Coupe, and feature similarly high price tags, at £100,085 for the BMW and £104,795 for the AMG. All are impressive in their own right and very much an acquired taste as objects, but Porsche’s latest probably still has the edge as a driver’s car.